LINDSTROM STILL THE ONE

Just had our daily dugout pow-wow with manager Fredi Gonzalez, who said he's sticking with Matt Lindstrom as his closer. Gonzalez, Lindstrom, pitching coach Mark Wiley and bullpen coach Steve Foster met in the manager's office Sunday morning to discuss the reliever's recent failings, including Saturday's ninth inning when Lindstrom loaded the bases, failed to complete the inning and was charged with two runs without receiving the save. 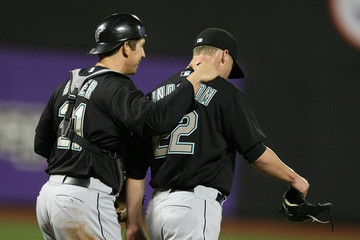 "I think maybe he's just giving the hitters too much credit," Gonzalez said. "But, other than that, his arm's good, everything else is good."

Gonzalez said he was discussing the Lindstrom situation in the manager's office with Wiley and Foster on Sunday when Lindstrom happened to walk in and join in the conversation.

"He came in and we spoke, which is good," Gonzalez said. "We were all in there talking about what he needs to do. It's not stuff. A lot of it is unnecessary baserunners. Those walks are what end up hurting him. And he knows that."

Lindstrom has given up 24 hits and walked 19 in 23 1/3 innings for a WHIP (walks plus hits divided by innings pitched) of 1.84. Of the 126 pitchers in the majors that have thrown at least 20 innings this season, Lindstrom's WHIP ranks 122nd. In contrast, Leo Nunez -- who took over for Lindstrom in the ninth and recorded the save after giving up a 2-run single to Aaron Rowand -- ranks 27th overall with a WHIP of 1.07.

"It's a learning curve for sure," Lindstrom said. "Basically, I'm just frustrated in myself for not going after (Rich) Aurilia with more fastballs. I was trying to be picky with sliders and stuff. That's not me. I'm walking guys and stuff. That's not being aggressive in the zone. I'm trying to make guys hit pitches that are out of the strike zone. It's just a matter of me needing to go out and do my job better. I need to be more aggressive with (the fastball)."

-- When Jorge Cantu pulled up at second with a 1-run double in Saturday's fifth inning, he felt dizzy and light-headed. On Sunday, Cantu was out of the lineup and said he was scheduled to see a doctor to figure out what's wrong.

"It's weird," Cantu said. "We've got to figure out what's going on. It's been lingering."

Cantu said he has been feeling dizzy and nauseous for about a week. He said he wasn't sure if he has contracted the same viral infection that struck teammate Wes Helms and the Mets' John Maine and Carlos Beltran.

With Cantu out of the lineup, Ross Gload is playing first this afternoon when the Marlins face Giants ace Tim Lincecum: