PHOENIX -- Luis Ayala is the newest member of the Marlins bullpen after being called up Sunday from Triple A New Orleans. The veteran right-hander received the call after the Marlins sent Sean West back to Double A Jacksonville after his poor start on Saturday.

It'll be interesting to see how the Marlins use Ayala, who was released by the Minnesota Twins. Ayala has closed in the past -- he had nine saves as a fill-in closer for the New York Mets last season -- but has been used primarily in mid- to late-inning situations. 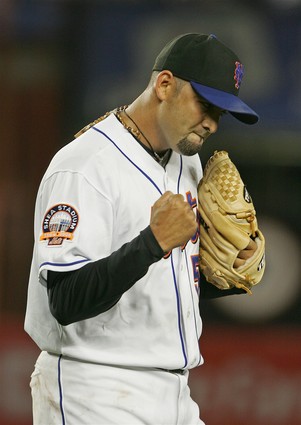 "He's done it all in his career, so I'm not opposed to using him in any situation, really," said manager Fredi Gonzalez.

Said president of baseball operations Larry Beinfest: "We don't need a fifth starter until a week from Monday in San Diego. Really, we want to take a look at him and Brendan (Donnelly) to see if they can not only bring us experience, but also help us."

Ayala, 31, is familiar with many of his new Marlins teammates, having either played with or against a number of them. Ayala has been teammates with Jorge Cantu and Alfredo Amezaga on Mexican national teams. And, having spent nearly his entire major league career in the National League East with either the Montreal Expos/Washington Nationals and New York Mets, he's also familiar with the Marlins from the opposite side.

"He's just a lay-loose kind of guy," Cantu said. "He's got experience and he knows what he's doing. He's aggressive and comes right at you."

Ayala made three appearances for New Orleans, throwing three shutout innings while allowing just one hit. The Twins released him, reportedly because Ayala expressed his unhappiness over not being used in the set-up role.

"I don't want to say anything about the Twins, but sometimes the system you don't feel good," Ayala said. "But I feel good about coming here. I can do everything (any role)."

Signing Ayala is costing the Marlins just $180,246 as the Twins are picking up the remainder of his contract.

As for the now vacated fifth starter spot, it appears that Rick VandenHurk (4-1, 2.96 ERA in eight starts at New Orleans) is the heavy favorite to take over the role, though the Marlins don't need a fifth starter until July 20.

"At that point, seeing how we feel, we could either go with 13 pitchers and move a position player, or just go pitcher for a pitcher," Gonzalez said of future roster scenarios.