Anibal Sanchez's return to the Marlins' rotation Friday night turned out be even better than what manager Fredi Gonzalez was hoping for. Gonzalez set a goal for Sanchez to reach 100 pitches and last between five to seven innings. 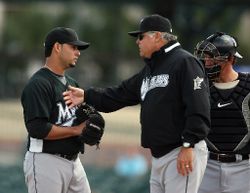 Sanchez gave up one earned run on 82 pitches and took a no-hitter into the sixth, striking out seven and retiring 14 in a row at one point after giving up two first-inning walks. He would have pitched longer, according to Gonzalez, if not for the long layoff between innings (the Marlins scored four runs in the seventh, and a local singer took a little long singing God Bless America during the seventh inning stretch).

‘‘The thing that was really nice to watch was he added and subtracted on his fastball," Gonzalez said. ‘‘A couple times he'd [throw] 94 [miles per hour], then he would back off and hit 91. He threw his breaking pitches for strikes. His command was good. He challenged hitters. For me, he has to have confidence now his arm is going to hold up."

The Marlins' rotation could certainly use a boost. Florida starters rank 19th in baseball in ERA (4.60) and have thrown just 692-2/3 innings after Friday -- 24th fewest in the league.

How big a plus? Pitching coach Mark Wiley said Sanchez could be as big a boost as Josh Beckett was to the Marlins in 2003. Beckett missed two months (May, June) and turned out to be the Marlins best pitcher in the playoffs because he was fresh at the end of the season.

"Every team would like to have a fresh arm at the end of the season," Wiley said. "Sometimes, teams will bring up a guy from the minor leagues that hasn’t pitched that much and he’ll give a team a boost, a guy on the disabled list will come back and give you a boost. That happened her in 2003 with Beckett. He was out for over a month and came back and throughout the playoffs and World Series he had the strongest arm in baseball because he had a month and a half off. There is always that possibility when you get a fresh arm that it can really help you. After what I saw last night, I’m hoping he can stay there and he can move on and he can be a major part of what we’re trying to do."

Here's what Wiley said he liked in Sanchez's start: "I think he showed the kind of arm strength he needs not only for his fastball, but for his other pitches to be able to duplicate them and be aggressive with him. I think his overall strength, not only helps his fastball but it shows up in his changeup and his breaking ball. He’s able to maintain his arm slot and release point is more consistent when he has that strength. That’s what he showed last night."