They started the season winning 11 in a row before dropping the next seven. In June, they swept two series (Toronto, Baltimore) and were swept once (Rays). We all know what happened last week. 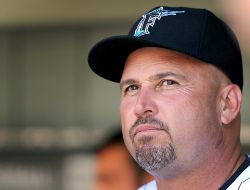 If this Marlins season has felt like a line from a Paula Abdul song to you, you aren't alone. The Marlins know inconsistency kills playoff dreams. Entering Monday night's first of four games against visiting Houston, that was the talk in the clubhouse.

“We know we’ve been a little inconsistent,” Cody Ross said. “We win 11 in a row and then lose 8. As a team we know that. Whenever we’re riding that wave we have to ride it as long as we can. When we have those losing streaks, we have to end them quickly, pick it up and get a victory and not fall in those holes. We’ll be one or two games back and the next thing you know, we’re seven games back. We’re four [games out] now and if we can pick up a couple wins in the next couple games, the last month of this season will be really fun.”

Fun is what the Marlins have been having with their bats since the most of August began. The entered Monday's game with eight consecutive games with double-digit hits and a .311 average, 13 homers and 48 runs scored. Newly acquired first baseman Nick Johnson, second only to Albert Pujols in OBP in the NL, has helped sure up the top of the order. Sandwiched between Chris Coghlan and Hanley Ramirez, Johnson has hit .333 (8 for 24) since arriving. But where he's helped most is getting on base. He's racked up 10 walks.

The problem is, the Marlins are just 4-4 this month. The reason? Coghlan (19-for-38 since Johnson arrived) and Johnson aren't being brought in regularly. In eight August games, they've left 77 runners on base. Before his 2-for-3 Sunday in Philly, Jorge Cantu was 0-for-11 with runners in scoring position during the stretch.

NL PLAYER OF THE WEEK: Chris Coghlan didn't win NL National League Player of the Week honors Monday. Arizona's Mark Reynolds made a stronger case, hitting .448 with a major-league-leading six homers. But he's not sweating it.

‘‘That's stuff if you get it, it's cool. But it doesn't mean anything in the long run," Coghlan said. "My goal is to get into the playoffs. So, that's what I'm concentrating on. My job is to get on base and help the team win."

‘‘I've seen guys get hot, but to see a young guy do it is pretty remarkable," Wes Helms said. "He's the type of guy you hope sticks to the game plan because if he does he's going to have a long career. I'm proud of what he's done because he's helped us stay in this playoff race."

Manager Fredi Gonzalez said it's more than Coghlan's bat that should earn him rookie of the year consideration.

‘‘The stuff people don't see is how well he's played defensively," Gonzalez said. "He made a catch two nights ago that kind of saved us against the Phillies. [Jason] Werth hit it and Chris went up against the fence and caught it. He's doing it all right now."

COUPLE NOTES FROM MONDAY...
> Reliever Kiko Calero said the reason he was pulled from Sunday's win in Philadelphia was because of a tight right quadriceps. "I think it was from when I got hit by [Kosuke] Fukodome when the Cubs were here," Calero said.

Calero said his muscle had been feeling weak and was removed so he wouldn't hurt injure his shoulder. He expects to rest a couple of days.

> Anibal Sanchez, who pitched 6-2/3 strong innings in his last minor-league rehab outing, will get two more minor-league starts with Double A Jacksonville. Gonzalez said Sanchez will try to throw 90 pitches Wednesday and 100 pitches in his following start next Monday.

"We'll see how these next two go," Gonzalez said. "This is his next target. If and when we make that decision that he's good to go, we'll know he's thrown at least 90 to 100 pitches a couple times."

> Gonzalez said he wants to see Matt Lindstrom throw on consecutive nights before entertaining the idea of moving him into the closer's role. He said Lindstrom, who has had three scoreless appearances since returning from the disabled list Aug. 1, could get his first opportunity to close if current closer Leo Nuñez pitches on consecutive nights.