When I spoke this morning with Andrew Miller, the Marlins lefty told me he had no desire to check out Stephen Strasburg when the hot shot prospect for the Nationals make his Arizona Fall League debut in Phoenix tonight.

"I'm not going out of my way to watch him pitch, let's put it that way," Miller said.

Not that Phoenix is that far out of the way for Miller, who also finds himself in the AFL with Mesa. But Miller is dealing with more pressing issues, such as trying to get his own career on track. He'll resume the process on Saturday when he takes the mound for Mesa. 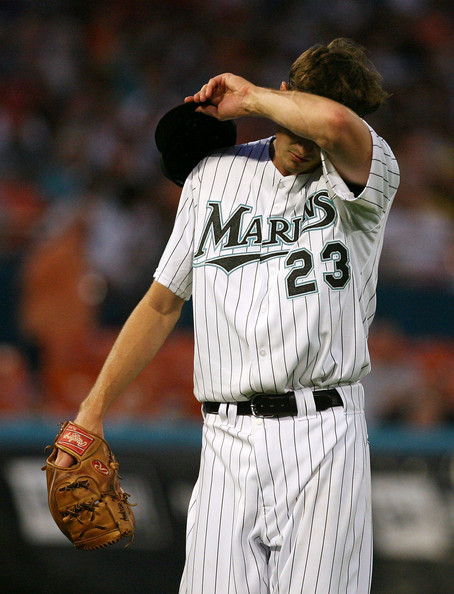 "I think the plan is just to throw and get some innings," Miller said. "I'm working on the same stuff that I was working on at Triple A and throwing bullpens in September -- mechanical stuff to stay back -- and trying to throw as many strikes as I can. Same thing as always."

The Marlins sent Miller to New Orleans in July for an overhaul. But an ankle injury early on nixed those plans. And when Miller was called back up in September, he was used sparingly, and only out of the bullpen. He has won nine games and lost 15 since arriving in the trade with Detroit, disappointing to say the least for the Marlins.

Jim Fleming, the Marlins' vice president of player development, said Miller's AFL experience would likely consist of making five or six starts totaling 25 to 35 innings. The goal is to have a new and improved Miller ready to go for spring training

"It's really a two-headed goal," Fleming said. "One is to get him some more innings because he didn't have enough (just 80 for the Marlins last season). And two is to get him some more innings to work on those (mechanical) things and establish some consistency with his delivery. He's always been a little bit across his body. We're not taking that totally away. But we're making it a little straighter line to help take some pressure off his knee and help him throw strikes."

Miller had a strikeout/walk ratio of 1.37 last season, which ranked 81st out of 90 National League pitchers with at least 80 innings. Fleming said roving pitching coordinator Wayne Rosenthal would head out to Arizona to monitor Miller. Mesa manager Brandon Hyde, who managed the Marlins'' Double A club in Jacksonville, will also be sending reports back to South Florida.

"Rosy's going out sometime this week and kind of re-establish we're headed in the right direction," Fleming said.