Some members of the Marlins -- including manager Fredi Gonzalez, outfielder Chris Coghlan and president of baseball operations Larry Beinfest -- are on a goodwill mission to Iraq, where they plan on spending time with U.S. troops over the coming week. Marlins catcher John Baker has agreed to serve as a foreign correspondent, sharing his thoughts and observations on the trip by sending occasional updates to Fish Bytes. Here's his latest as the Marlins contingent prepared to pull out of Kuwait and head into Iraq.

The first full day in Kuwait will be a tough day to beat.

My morning started with a light breakfast in the executive lounge at our hotel, I had some fruit and yogurt along with a double espresso in hopes that it would trick me into thinking it was really 7:30 in the morning and that I had actually gotten six hours of sleep.

We met in the lobby at 0830 hours (I think writing/saying the time this way sounds way cooler than “8:30 AM”) and after a brief stop at a Kuwaiti Starbucks headed to camp Arifjan. Now I am sure someone will correct me on what I am about to write, but I did not take notes, so everything I am putting to cyber paper is strictly from memory.

Camp Arifjan is the largest US Military Base in Kuwait. After Operation Desert Storm in 1991, Kuwait quickly realized that they could not adequately defend themselves from their hostile neighbors without the help of a large military power. Kuwait is a small country that sits on a large reserve of oil. Kuwait is roughly the size of New Jersey but is the tenth highest producer of oil. It is also a large seaport located in the perfect location to stage military operations for any country interested in the Middle East region. The relationship between Kuwait and the US is made out of necessity: the Kuwaitis need military help and the US needs a place to house/train/prepare soldiers and equipment for any Middle East operation.

The first stop on base for us was the PX store, it is like Wal-Mart for the the military. The store has everything one needs, from desert boots to Nintendo Wiis and televisions. I picked up a few things that say “Kuwait” on them for family members. I also bought myself a military watch since I forgot to bring a watch with me. After we checked out, we headed to one of the main buildings for a briefing where we learned the aforementioned information. We were also given a certificate of gratitude and an Army challenge coin. Members of the Army are given the coin unofficially by superiors as an “attaboy” or job well done. Any member can challenge another member from a different company with his or her coin. If the opposing member matches the coin with a similar one, the challenger must buy the challenged a drink, and vice versa. It is a way to build morale and familiarity between different people. Funny that no one is buying any drinks, because Alcohol is prohibited in the country of Kuwait. One of the posted photos is of me receiving my certificate.

After we were briefed, we headed to one of the community rooms to sign autographs and meet troops, we were there for quite awhile and met many interesting people. It was a fantastic first interaction as everyone was very happy to see us. It is very personally rewarding to shake hands with someone and know that you have made their day or maybe even month better. It is also strange because Chris and I don’t really feel like we are doing anything that special. I guess just being here is a pretty big deal.

After we signed for and thanked the soldiers, we joined them in the DVAC for lunch. I sat with a guy that was from the Dallas area that was on his third tour of duty.

He told me fascinating stories about driving patrols from Arifjan all the way to the northern part of Iraq. It is amazing the things these men and women do for us.

We then packed into some Chevy Suburbans and headed to Kuwait Naval Base or KNB. We learned that despite being a Kuwaiti Base, it is fully operated by Americans. I only saw one Kuwaiti person while we were there and he was drinking tea in a guard booth, while members of the US Army patrolled the gate. We met with a company of men from South Dakota, Minnesota, Hawaii and California. The Californian played in a local Jazz Band (Concord Blue Devils - www.bluedevils.org ) near my home town in Concord. He also briefly taught drums at the same High School that I attended, De La Salle! What a small world. Half way across the globe and we meet for the first time. 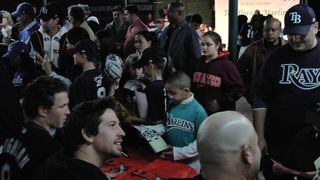 After our briefing, we boarded a small patrol ship with some members of the Navy and the US Coast Guard. The small ship was very fast and had three guns mounted on it. The one on the front was a fifty caliber! The gun was the same model used in WWII as an anti-tank weapon, the only update: plastic instead of wooden handles! We cruised around the Persian Gulf, skipping over waves, getting salt water everywhere and having a fantastic time. The crew of our boat was great. They let us take photos with the guns and even let one of the Mermaids, Estefania, drive, until she almost flipped the boat and deposited our team president in the Gulf!!!! This was the most exciting part of our trip to this point.

After we got back onto dry land, the girls performed a dance routine for the guys at KNB, we signed more autographs and met more troops then joined them for dinner in their DVAC. After dinner our entire party was starting to look increasingly weary, thankfully we only had one more stop.

We got back into the Suburbans and headed to the Kuwait Little League Complex. We were greeted with raucous cheers of “Let’s Go Fish!” as we walked into the small outdoor complex. There were a few decently manicured little league fields and around three hundred members of the KLL. The interesting part about the league is that it is the only league in the region run by a national and not an ex-pat. 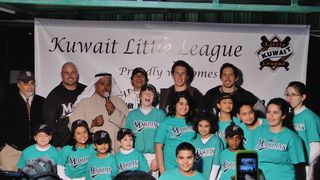 The commissioner of the league was a Kuwaiti man that went to college at the University of Miami and married a Cuban-American women from South Florida. Needless to say they were big Marlins fans, and half of the teams in the league were called the Marlins! We answered a few questions and then signed a ton more autographs, Fredi Gonzalez finally showed up (his first flight was cancelled due to inclement weather in Atlanta), and took some photos with the members of the league. When that was done we headed back to the hotel for some food and some much deserved R&R.

(P.S. -- Clark,  I don't know when I will be able to do this again because we are heading to a place where the internet is scarce.)

If you want to read more about Baker and the trip, you're invited to visit his personal blog at www.johnbakerbaseball.com or follow him on Twitter at @manbearwolf. Coghlan is also updating the Iraq trip on his Twitter account: @cogz4Christ