« Stanton heads down, but leaves impression | Main | Lowell not sure he would be a fit for Marlins »

FORT MYERS -- With only eight Grapefruit League games left and time winding down this spring, manager Fredi Gonzalez said Thursday morning he'd like to have the two remaining openings in his starting rotation "cleared up" by the end of the week. 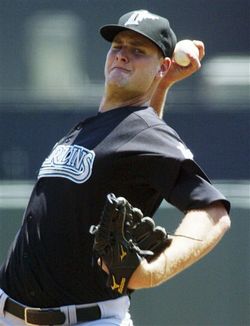 That means Thursday's start against the Red Sox for Chris Volstad will be huge. If he pitches well, Volstad will probably cement a spot in the rotation. But if he struggles again, he could open the door for a few others.

The 23-year old right-hander pitched well in his last start against the Nationals Saturday, walking two, scattering six hits and giving up just one earned run over five innings. But one good start out of five won't make Gonzalez or anybody in management feel good heading into the season.

"He just needs to continue to do what he did against Washington and that's throw his sinker down in the strikezone and stick with that pitch," catcher John Baker said Wednesday. "That's what he did in 2008 when he got into trouble. He threw the ball in the middle of the plate and looked for ground balls. He needs to do the same thing, trust himself and trust his ability. If he does that, he's going to throw five innings and give up one run like he did the other day."

Rick VandenHurk is scheduled to "piggy-back" Volstad for a couple innings Thursday and at this point is likely third among the four players still competing for the final two spots in the rotation. Right-hander Clay Hensley, most believe, is currently in second when you consider he and not left-hander Andrew Miller will get the start Saturday in the big league game against the Cardinals in Jupiter.

Hensley hasn't given up an earned run or walked anybody in 10 1/3 innings and has retired 32 of the 37 batters faced. But he hasn't started either. Miller (1-1, 7.04 ERA) will start the Triple A game Saturday on the backfields at Roger Dean Stadium.

> ROSS STILL NOT READY: When outfielder Cody Ross left Tuesday's game against the Orioles with cramps in his right calf, Gonzalez didn't expect him to miss much time at all. But as it turns out, Ross still isn't even running. Ross said he's simply being cautious and he would be in the lineup if it was the regular season. But considering he's missed time because of a jammed thumb and a groin strain, he said he's considering asking for a few at-bats in Triple A. Ross is 4 for 22 this spring (.182).

"I definitely need to get out there and I need to play," Ross said. "It's frustrating these little nagging things. These are things if it was the season, I'd be out there. But I don't want to keep aggravating it. So, we're being cautious."

> CARROLL INJURY UPDATE: Outfielder Brett Carroll, who left Wednesday's 4-1 loss to the Twins with a strained left oblique, said he woke up Thursday feeling better than he was expecting. At this point, Gonzalez is guessing Carroll will be out at least a week.

The timing obviously couldn't be worse for Carroll considering he was trying to compete with Brian Barden, Donnie Murphy and Mike Lamb for the final spots on the bench. "I just want to take the right steps," Carroll said. "As eager as I am to put it behind me and get back out there because I know it's an important time, I have to be patient with it."