« Slumping Coghlan Sits With Sore Left Side | Main | Lamb gets start vs. Halladay; Coghlan still out »


Keith Law was at Sun Life Stadium on Wednesday when Jorge Cantu went deep off Cincinnati's Homer Bailey in the fifth inning. But Law was momentarily occupied and missed the blow that put Cantu in the record books for having the longest streak of games with an RBI to start a season: nine.

Law, senior baseball analyst for Scouts, Inc., regular columnist for ESPN.com, and a former special assistant to the general manager for the Toronto Blue Jays, is not in awe of Cantu's major league record RBI mark. Far from it. It has nothing to do with Cantu, whom Law dismisses as "below average" offensively and defensively for a corner infielder -- "a trade or non-tender waiting to happen" -- and everything to do with his utter abhorrence of the RBI as a statistic. 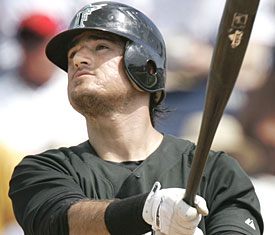 "It doesn't really tell us anything useful about the player's performance, that's the bottom line for me," said Law, who argues that RBI, pitching wins and saves are the three most overvalued statistics in baseball. "I still look at the stats. But the RBI column, I just will not be there. About the most useful thing it tells you is how much a guy plays -- the more you play, the more RBI you have -- and it tells you how often the guy in front of him gets on base. Of course, if you want to know how often a guy gets on base, just look at their on-base percentage."

Law said the "bellweather" in the RBI debate is former major leaguer Joe Carter, who drove in 115 runs for the 1990 Blue Jays. But Carter was substandard in just about every other regard. He posted a miserable on-base percentage of .290, which was one of the 10 worst figures in the majors that season, and an equally lousy OPS (on-base percentage plus slugging percentage) of .681.

"If you look at RBI, you think he had a great year," Law said. "But if you look at the statistics, he didn't have a great season. It was very ugly. But he played in 162 games."

It has been often said that Cantu has a "knack" for driving in runs, reasoning that Law also finds fault with.

"You slap anybody who says that," Law said. "It is stupid. That whole thing just has to die. You know, the implication when somebody says that is when nobody is on base, this guy takes off for the at bat. I don't think we've ever encountered a player who is consistently better with runners in scoring position. It's true of almost every player."

Case in point is Cantu, who is a career .278 hitter overall. Cantu's career average with runners in scoring position: .285.

Cantu hasn't exactly been tearing the cover off the ball during his RBI streak, which actually started late last season. During the current 13-game stretch in which Cantu has had at least one RBI, he's gone 18 for 52 at the plate, a solid but not otherworldly .346 average.

"What's more important? RBI or runs scored?," Law asked. "If you were going to focus on either of these things, the runs scored stat would be more valuable. The hardest thing is to get on base. You can knock in a run with an out.

"With Cantu's streak, what if he goes 5 for 5 and nobody was on base? If that's how a streak can end, where the hitter does everything but hit a home run and the other hitters didn't get on base for him, then the streak is worthless. It's all about context."

I mentioned to Law that Cantu is closing in on the major league record for consecutive games with an RBI: 17. The record was set in 1922 by Ray Grimes Sr. of the Chicago Cubs.

"I hate to sort of couch it in popular terms," Law said. "But the fact I've never heard of the guy you just mentioned doesn't speak very highly of the importance of the record."

Some Marlins take extreme exception to the thinking that the RBI is overrated.

"I think it's the most important statistic," said former Marlin Jeff Conine, who is now a special assistant to president David Samson.

Coghlan Remains Out of Lineup

Brett Carroll is back in left field tonight for Chris Coghlan, who sat out last night's game with soreness in his left side.

Coghlan said he could return to the lineup on Friday under a "best-case scenario."

-- Reliever Brian Sanches will pitch live batting practice in Jupiter on Friday and make his first rehab appearance on Monday for the Hammerheads. If all goes well, he said he expects to be activated from the DL on April 26 when the Marlins return from their nine-game road trip.