PHILADELPHIA -- Friday night's seventh inning was one to forget for reliever Dan Meyer. With a little more than a dozen family members and friends from right up the road in his hometown of Mickleton, N.J. in attendance, the 28-year old left-hander had his worst outing in a Marlins uniform. 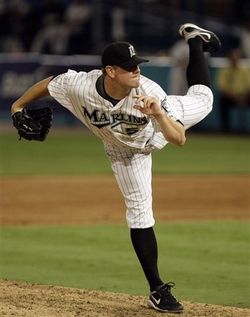 It started with a bang when Chase Utley drilled a 2-2 change-up from Meyer into the seats in right field for a leadoff home run. Then, Meyer gave up a single to Ryan Howard, an RBI double to Jayson Werth, a walk to Raul Ibanez and a single Juan Castro before manager Fredi Gonzalez came and yanked him. In all, Meyer didn't retire a single batter he faced and saw his ERA shoot up to 19.31 on the season.

"I had a bad day at work and unfortunately it was in front of 40,000 people and who knows how many else on TV," Meyer said. "My family still loves me, though."

His Marlin family still does, too. Manager Fredi Gonzalez said Meyer pitched too good for him last year to discard him after a bad week. "We could always talk about somebody negatively whether it's a pitcher, a starter or a coach," Gonzalez said. "Hitters go 0 for 10 or 0 for 20. Sometimes relievers get themselves in a little funk. For me, that's all it is. [We'll] keep running him out there."

In Meyer's first full season in the majors last year, he made 71 appearances and went 3-2 with a 3.09 ERA. He started this season by retiring four of the first six hitters he faced in three appearances, giving up a single in a win over the Dodgers and walking the only batter he was faced Monday against the Reds.

His last two outings have been much rougher. Tuesday, he picked up the loss in the Marlins' 11-inning defeat to the Reds, giving up three hits, two earned runs and two walks in one inning. Friday's implosion followed. Meyer said his cutter was "a little flatter" in both of his last outings. But Saturday, when he threw a bullpen session with pitching coach Randy St. Claire, Meyer said his go-to pitch was working again "like it was last year."

"Everything is there," Meyer said. "It's correlating that to the game. I hope Fredi and those guys still have confidence in me. I'm still going out there giving it all for these guys."

> Right-hander Chris Leroux, who relieved Meyer Friday and promptly got out of the bases loaded jam he was given, got to live out a childhood dream in his second appearance since being called up from Triple A New Orleans on Wednesday.

Among the six outs in his two scoreless innings of relief, the 25-year old Toronto native was able to strike out former Blue Jays ace Roy Halladay. Leroux said his mom asked him before Friday's game to get an autograph from Halladay, who spent 11 full seasons with in Toronto and won the Cy Young award in 2003 before being acquired by the Phillies in a multi-team trade last December.

"I've always watched him and somewhat idolized him," Leroux said. "Just seeing him step into the [batter's] box was cool."

As for the autograph, Leroux said he's counting on a clubhouse attendant to get it for him. "Hopefully, he won't take the strikeout personally," Leroux said.

> Phillies manager Charlie Manuel said after Friday's 8-6 win he thought Gonzalez wanted umpires to delay the game because of the rainy conditions, which might have meant avoiding Halladay, who would not have come back to pitch if the delay was long enough.

“You’d have to ask Fredi, but I think he wanted to stall and see if they would stop the game before five innings and we wouldn’t get the game in," Manuel told Phillies writers. "But, whatever. I don’t know. You have to ask him.”

When asked about it by Marlins writers before Saturday's game, Gonzalez had a little fun. "Where is he? Let me at him," Gonzalez said before motioning as if he was going to dart off the Marlins bench to chase Manuel down. "I wasn't stalling. I was trying to get the field ready."

> Left fielder Chris Coghlan is back in the lineup after missing three games with sore ribs thanks to a diving catch in the outfield Tuesday. Gonzalez said Coghlan would have been used in a pinch runner situation Friday night had John Baker reached base in the ninth inning.

Gonzalez said Friday he thinks Coghlan and Cameron Maybin, who hit leadoff when Coghlan was out, are "interchangeable" at the top of the Marlins lineup.

"I think before it's all said and done, he could hit in the middle of the lineup," Gonzalez said of Maybin. "He's got some power that's going to develop late. I don't see him like a [Astros outfielder] Willy Tavares type guy. He's a guy who chops the ball and runs. [Maybin] is a guy that can juice the ball."