In the 18-years the Marlins have called Miami Gardens home, the stadium they've rented from the Dolphins has had many names. The one constant -- aside from the orange stadium seats -- has been the big teal scoreboard in left field. 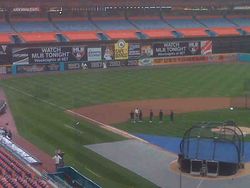 Well, the Teal Monster is no more. Friday as the Marlins took the field for warm-ups at Sun Life Stadium for Opening Night, players paused to take notice that the familiar teal out-of-town scoreboard (once mechanical before it became digital) had been replaced by full color advertisements for the MLB Network. And the teal boards where the starting lineups were once posted (on each side of the Cafe Bustelo clock) were also replaced by Marlins ads -- one featuring Billy The Marlin.

The explanation from Marlins brass for the change: "The bulbs were constantly malfunctioning and popping," said PJ Loyello, Marlins senior Vice President for Communications and Broadcasting. "It was cost prohibitive to just replace the whole thing."

With the Marlins set to move into their new stadium in 2012, the Marlins don't see it as a big deal. Fans, Loyello said, can turn to the ribbon scoreboards (the electronic ones that wrap around the stadium) for out of town scores and to the large electronic scoreboards for lineup information.

> Hall of Fame inductee and Miami native Andre Dawson is set to throw out the first pitch tonight before the Marlins take on the Dodgers at 7:10 p.m. Manager Fredi Gonzalez said Dawson, a special assistant to Marlins President David Samson, has meant a lot to the club over the years.

"He's like [investment broker] E.F. Hutton -- when he talks, you better listen," Gonzalez said. "He has a lot of good stuff to say. Real quiet. Real reserved. But when he says something you better listen. I think our guys use him a lot. He and [Tony Perez] are also pretty good evaluators. They not only help us up here, but the minor leagues. They help Larry [Beinfest] and David [Samson]. They do a lot of stuff for this organization."

> Relief pitcher Brian Sanches said he threw off flat ground Thursday for the first time since straining his right hamstring warming up in the Marlins next to last exhibition game of the spring. Sanches, who has been on the disabled list since April 3rd, said he's hopeful he can return when he is 15-day stint is up.

"To me when the 15 days are up, I want to be ready to go," Sanches said. "I don't know how realistic that is. It's feeling good right now. I haven't had any problems. Yesterday was pain free. The stuff I'm doing on the bike, treadmill stuff has been pain free. Stretching has been going real good. Hopefully, we can get out there quicker."

Sanches' replacement, Tim Wood, picked up his first career save in the Marlins 7-6 10-inning win Wednesday night. Wood, who was supposed to begin the season at Triple A New Orleans, said he's waiting to see how long Saches will be out before recalling his luggage. At the moment, Wood said, he's surviving with what he has in a little suit case.

"All I have is a few shirts, a few pairs of jeans and some underwear," said Wood, who is staying with teammate Chris Volstad during his stay with the Marlins. "I have one suit of course. For the most part, everything else is in New Orleans -- my X-Box, all that stuff."