Just spent some time on the field with Marlins owner Jeffrey Loria, who gave manager Fredi Gonzalez a giant man hug and told him the speculation surrounding his job was, in no uncertain words, "absolutely" hogwash.

But in speaking with reporters, Loria never exactly came out and said Gonzalez's job was 100 percent secure.

"Please, stop with that," Loria said of the speculation surrounding Gonzalez. "Fredi and I are just fine. Fredi and the Marlins are just fine. Enough already. Please stop. I am not giving more life to what you want to be a story. Did you just see me come and hug the guy?" 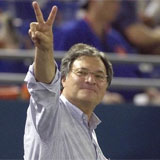 Loria on minor league prospect Mike Stanton, who hit his 14th home run Thursday night for Double A Jacksonville, an estimated 500-foot blow in Montgomery, Ala., and when he might be promoted to the Marlins:

Loria on the Marlins overall:

"Who can be thrilled with being two games under? The team is better than that. Fredi had a long talk with them today. State of the Union message. the appropraiate city to do that in. I told him he should do that up at the Lincoln Memorial. Maybe they would be overwhelmed. They know they're not playing up to their abilities. I have no worries whatsoever. They're going to be fine.

"There's a lot of room to move forward. We came out of spring training, I thought, a little flat, and we're working our way out of that now.