A night after watching their bullpen implode in a loss to the Braves, the Marlins dipped into their minor league system Thursday afternoon to bring in some fresh blood. 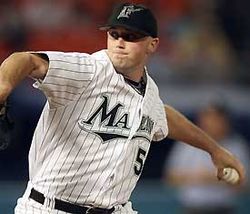 Former first round pick Taylor Tankersley, a left-hander who pitched for the Marlins in 2008, and right-hander Jay Buente were called up from Triple A New Orleans to replace Renyel Pinto, who went on the 15-day disabled list with a left hip strain, and the struggling Burke Badenhop, who started the bullpen's six run, seventh inning Wednesday and fell to 0-5 with a 6.43 ERA.

The Hopper's demotion was inevitable considering how much he struggled this month. His sinker and slider simply weren't working the way it was in April when he had a 3.65 ERA and was still getting big outs. Badenhop posted a 10.38 ERA in eight appearances this month.

Pinto's loss might be celebrated by more than a few fans in the streets here in Miami. But aside from making things dramatic by walking and hitting a few guys this season, Pinto's numbers actually aren't bad. He had an 2.30 ERA in 19 appearances, 15 2/3 innings.

This is the first big league appearance, meanwhile, for Buente, a 26-year old former 14th round pick out of Purdue in the 2006 draft. He spent most of his fourth pro season last year between Double A Jacksonville and New Orleans, going 5-2 with a 3.14 ERA. He was 0-1 with a 2.70 ERA in 19 games in Triple A before this.

Utility man Mike Lamb, meanwhile, was also recalled from New Orleans to take the spot of outfield Bryan Peterson, who was sent down to Triple A Wednesday. Peterson was 1 for 16 in mostly pinch-hit appearances for the Marlins. Lamb was hitting .250 in 13 games for the Zephyrs. He was hitting .222 with only 3 RBI in 18 games when the Marlins first sent him down earlier this month.

We'll have more once the clubhouse opens.