Dan Meyer was one of the Marlins most valuable weapons in the bullpen last season. Now, he's looking for a job. 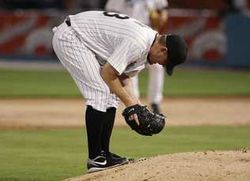 The 28-year old left-hander was designated for assignment after Thursday night's 8-3 loss to the Braves. Jorge Sosa, a 31-year old journeyman right-hander from the Dominican Republic, will be coming up from Triple A New Orleans to replace him. It was the third move made by the Marlins to their bullpen in the last 48 hours, a clear sign management is looking to fix an area of major concern.

Meyer, who went 3-2 with a career-best 3.09 ERA last season in 71 appearances, just never seemed to find himself this season out of spring training. In his 12th appearance for the Marlins this season Thursday, he walked five batters and gave up two hits and three earned runs, raising his ERA to 10.80 on the season. He also gave up a run without recording an out Wednesday, but prior to that appeared to be turning things around after going on the disabled list. From May 16-23, in four outings, he hadn't given up an earned run.

But the Marlins, apparently, saw enough Thursday to throw in the towel. Now, Meyer must clear waivers before the Marlins can reclaim him outright. Otherwise, he'll be pitching somewhere else soon. That idea, the more likely scenario, nearly brought Meyer to tears as he hugged teammates and manager Fredi Gonzalez in the clubhouse after the game.

"I got a lot to figure out," Meyer said. "This is tough to swallow. But I have to be a man about it. I'm not helping this team, running myself out there every few days and trying to pitch. It's not so hard on me as much I have some life-long friends in this clubhouse. This is probably the best I've fit in. I love these guys. It's going to be hard not showing up here everyday."

Meyer said he couldn't put a finger on what exactly has gone wrong for him.

"I've been working with [pitching coach Randy St. Claire] since I've been back, just working on finishing, just working through, trying to carry it to the mound," Meyer said. "I felt like I had some pretty good outings. I felt great in Chicago for 1 2/3 innings. I couldn't have felt better. It's just amazing how five days ago I thought I was back and then go out tonight and your scrambling. It's like quicksand. The more trouble I get, the harder I'm trying, the deeper it gets. If I could say one thing about myself, my downfall is I care way too much."

"It's got to be something. I feel great now. I feel healthy. The stuff's there. Confidence wise, I've taken a little bit of a hit, since last year. It's a long hard road to the top, but a short fall to the bottom. For me, mentally, it's going to be tough. But it's not just mental. Mechanically, I'm not right either. I'm falling. I probably have more walks now than I did all of last year. It's probably something ridiculous. I mean, I walked a run in, which is absolutely embarrassing. That's just not right. I can't expect 24 guys to play hard for me when I'm out there just sinking. So, just got to keep plugging. 28 years old, be a man about it, nose back to the grind stone."

Sosa, who was 4-1 with a 3.78 ERA in seven starts for the Zephyrs this season, has plenty of major league experience. In eight big league seasons with the Rays, Braves, Cardinals, Mets and most recently the Nationals, he has a 42-50 record with a career 4.72 ERA.