If Garrett Wittels decides to take Dan Uggla's advice, the long locks of dirty blond hair dangling from underneath his baseball cap will still be around when the 20-year old FIU sophomore goes after Robin Ventura's NCAA-record 58-game hitting streak next season. 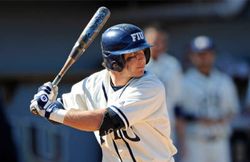 Wittels, who captured the nation's attention last month and finished two games shy of matching Ventura's record when his season came to an end last week, visited Sun Life Stadium as a special guest Wednesday. Before he went on the Marlins pregame show and sat in with TV announcers Tommy Hutton and Rich Waltz for an inning, Wittels talked shop with several Marlins and Rangers players during batting practice.

"The whole experience was really cool," Wittels said (CLICK ON THE LINK TO LISTEN TO HIS INTERVIEW WITH REPORTERS). "Cody Ross was a really good guy. I talked a little bit with Michael Young from the Rangers. It meant a lot to talk to them and all the coaches and everything like that. It was just a great atmosphere. They all congratulated me and told me no matter what level its at, its a great accomplishment and they wish me well in the draft next year and hopefully I could be playing on the same field with them."

Wittels also got plenty of tips on what to do about his hair. Wittels hasn't cut it since January, one of a few good-luck superstitions he maintained during the hitting streak. But with the season over Wittels said he's considered trimming it.

"Honestly I've thought about it a lot, about cutting the hair and all the superstitions," Wittels said. "Right now, I'm just focused on going up to Alaska on Friday. If I don't get a hit there, I might cut it or I might leave it to go for next year. I haven't made a decision yet. I've got to talk to a few people close to me and my coaches so they can tell me what they think about it."

Wittels said he will play his first game for the Peninsula Oilers, one of six teams in the Alaska College Summer Baseball League, on Saturday. The season ends in July. After finishing the 2010 season hitting .413 with 60 RBI, he hopes to have an even bigger junior season for the Panthers, who won the Sun Belt Conference Title before losing twice at the NCAA Regional Tournament in Coral Gables. One thing is for sure, MLB scouts definitely know about him now.

"Since I first put on a jersey when I was six years old, this has been the one goal," Wittels said referring to making into the big leagues. "Being here today, being able to spend one day here just fuels the fire and makes me want to work harder and be here on an everyday basis in a couple years."

NUNEZ PUTS BLOWN SAVE OUT OF MIND: Marlins closer Leo Nunez blew past reporters Tuesday night, not long after blowing his third save of the season in a heartbreaking 3-2 loss to the Rangers. But Wednesday, the 26-year old Dominican right-hander was more than happy to share the news that he'd already forgotten about his bad night.

"Those are things that are just part of the game," Nunez said. "It bothered me at the moment. But once I left I was fine. Last night was the 15th. Today is the 16th."

Nunez gave up the decisive two-run triple Tuesday on his first pitch to former Marlins catcher Matt Treanor with two outs and runners on the corners in the ninth.

Giving up big hits on the first pitch was a big problem for Nunez a year ago as opponents hit .370 with three homers off him in those situations. This season, Nunez has been a lot less predictable thanks to the addition of a slider and a much more effective changeup. Opponents are hitting just .214 against him in those situations (3 for 14).

BAKER UPBEAT AND OPTIMISTIC: Catcher John Baker was back in the Marlins clubhouse Wednesday and optimistic he could be back from the disabled list earlier than mid-August. Baker, who was told by an orthopedic surgeon to take four weeks off to rest the strained right flexor muscle in his right arm, said he thinks he could be back in uniform for the Marlins "by August 1st at the latest."

Baker said he plans to work out and do as much catching as possible and hitting from his left side to maintain a sense of timing.

HENSLEY BATTLING NECK PAIN: Right-hander Clay Hensley said he's battling neck pains from an injury he suffered a few weeks ago and is likely going to take a few days off to rest it. Hensley, the Marlins usual set-up man, didn't pitch with the Marlins clinging to a 2-1 lead Tuesday night and was replaced by Brian Sanches.

"It happened during the first game of the last home stand here," Hensley said. "I just had to get up quick and the fifth or sixth throw I felt something yank in my neck. It's progressively gotten worse to the point where it's starting to hurt when I'm pitching and doing normal day stuff. It's time to take a break and get it back to normal."