Is Leo Nunez relying on his change up too much?

ATLANTA -- Marlins closer Leo Nunez said one reason he's blown back-to-back saves is because he's been leaving pitches up in the zone a little too often lately. Manager Edwin Rodriguez, however, has a different take. 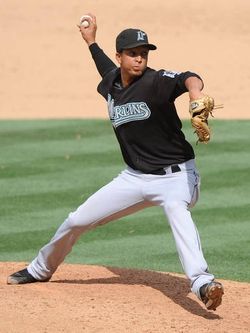 "I think he needs to go back to being a power pitcher, using his fastball and slider more," Rodriguez said Saturday. "He's using his changeup way too much. His changeup is only going to be effective if he uses his fastball. If he keeps throwing changeups after changeups, that's going to become his primary pitch... we're trying to get him to start using that strategy, approach more. He's a power guy, a power pitcher. He should us his fastball and slider."

Nunez, who has now blown five of his 21 save opportunities this season, couldn't get an out in the 11th inning Friday night despite being handed a 3-2 lead. He walked Brian McCann on four pitches to start the inning, then gave a double to Troy Glaus on a changeup before Omar Infante singled them home on a fastball to rally the Braves to a 4-3 win.

"The pitches were good," Nunez said of Friday's blown save. "I think it was just one of those days. There are days when you try to do your job, but things happen. I tried my best."

Nunez, who blew off reporters after the game, said Saturday the use of his changeup has been "normal." According to MLB.com's pitch tracker, of the 15 pitches Nunez threw Friday, only two were changeups. When he blew a save in the Marlins 7-6 win over the Mets Tuesday, Nunez threw 13 pitches and 10 were changeups.

Pitching coach Randy St. Claire told reporters during the spring Nunez was guilty of tipping his pitches last season based on the way he was holding his glove. Nunez gave up 13 home runs, among the leaders in baseball and blew seven save opportunities in 33 chances.

Friday's blown save might have been the result of him making the adjustment of using his fastball more and leaving it up in the zone.

UGGLA AN ALL-STAR?: When the All-Star rosters are released at noon Sunday, most expect shortstop Hanley Ramirez and ace Josh Johnson to be on the team. But second baseman Dan Uggla could also earn a trip to Anaheim.

With the Phillies' Chase Utley (thumb surgery) expected to be on the disabled list for two months, Uggla could potentially earn a spot on the team along with the Braves Martin Prado or Cincinnati's Brandon Phillips. Uggla, who entered the week third in the voting behind Utley and Prado, leads all NL second basemen in homers (15) and ranks second in RBI (46).

"I think Uggla deserves it," Rodriguez said. "He's having a very good year and started very strong for us. Although his average has suffered a little bit, he's still the same power guy, clutch hitter and his defense is there."

PLAN FOR MURPHY: Brian Barden's failure to get down a bunt on a suicide squeeze in the 11th inning Friday likely had nothing to do with why he was designated for assignment after the game.

Donnie Murphy, who was selected from Triple A New Orleans to replace Barden on the Marlins bench, said he was taken out of the Zephyr's game in Nashville Friday in the sixth inning. That was well before Barden failed to lay down a bunt, then struckout with runners on second and third in the 11th inning.

"I'm looking for more offense than defense in that position. So, that's why we decided to bring Donnie Murphy up, he's more of an offensive player than Brian Barden," Rodriguez said. "It's very unfair to say Barden is not going to be able to do it. He hasn't played in a while. Donnie Murphy was playing down in Triple A every day and I think he can help us more."

Rodriguez said because the team has been using Wes Helms earlier in the game and more often in double switches for Jorge Cantu or Gaby Sanchez, they needed a bat for the late innings. "I think Murphy could do that job," Rodriguez said.

Murphy's primary position is shortstop, but like Barden could play second or third base if needed. "It’s a good feeling to be back up here," said Murphy, who last played in the big leagues with the Oakland A's at the end of the 2008 season. "Hopefully, I can help this team out."