« Dan Uggla to the Giants? In Cody's Dreams | Main | Was Mike Stanton Nearly Traded To White Sox for Ozzie Guillen? Answer: No »

Waiting for the Marlins to name a manager is like watching a glacier melt. We're now three weeks removed from the end of the regular season and the Marlins remain in internal discussion mode in terms of putting the manager question to rest. Will they bring back Edwin Rodriguez? Or will they go with someone else?

Team president David Samson didn't shed much new light on the subject during a media tour of the construction site for the new ballpark on Tuesday, saying only that owner Jeffrey Loria and members of the front office continue to mull their options.

"The status is we're still having internal conversations," Samson said. "I think Jeffrey and Larry (Beinfest) and all of us are being contemplative and making a plan."

Samson said no announcement will be made until after the World Series.

"There will certainly be a manager by the first day of spring training," Samson said.

--  Marlins cast-offs Cody Ross (Giants) and Jorge Cantu (Rangers) are in the World Series, and Samson said he couldn't be happier. Samson said he has spoken to both Ross and Cantu, wishing them luck. "One of them is going to get a ring, and I think it's great," Samson said. The Marlins traded Cantu to the Rangers at the trading deadline and handed Ross over to the Giants on a waiver claim in late August. "This (the Ross decision) was an absolute baseball move," Samson said. "At the time, we felt we were going to be around a .500 team and the realistic chances of making the playoffs had faded. We wanted to get Cameron (Maybin), (Mike) Stanton and (Logan) Morrison going, and it was always part of the plan that we knew what the outfield would look like. And the future, given our payroll constraints, didn't include Cody and it didn't include Jorge Cantu."

-- Samson said he also congratulated Fredi Gonzalez after he was named to manage the Braves. "I spoke to Fredi and I congratulated him," Samson said of Gonzalez, who was fired as Marlins manager in June. "I told him I'm rooting for him except 18 times a year (when the Marlins and Braves play each other). He's the perfect person to take over for Bobby (Cox) and we're very happy for him."

-- Construction of the new ballpark is nearly 50 percent complete. Samson said he hopes to announce stadium naming rights by the end of the year. One new twist: the Marlins' dugout will be on the third base side, not the first base side as it is now at Sun Life Stadium.

This photo shows a view of the ballpark from the press box, looking out toward left field and downtown Miami......

And this view, taken from the first base side, shows the seating area behind home plate and down the third base line.... 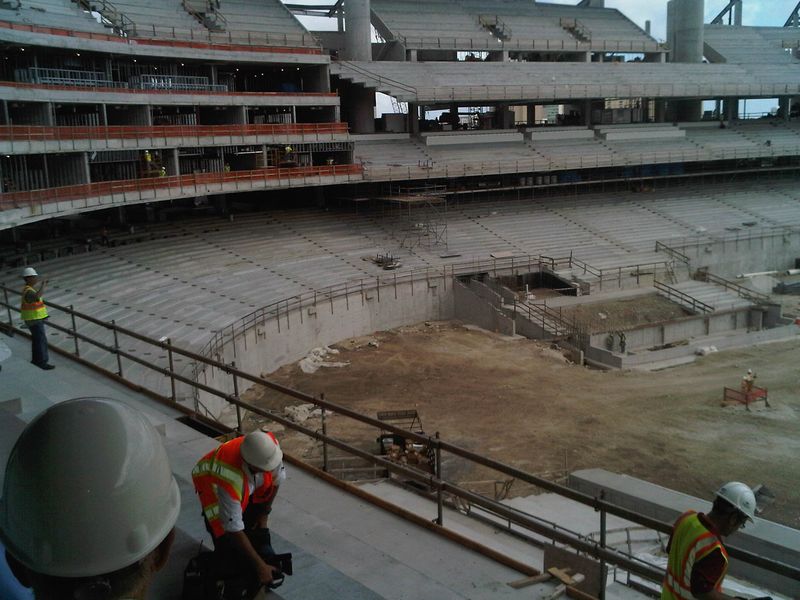