Jeffrey Loria checked into the Waldorf Astoria a moment ago for the owners' portion of the GM meetings and was intercepted by reporters in the lobby before he was able to get to his room. Loria was candid about Tuesday's trade of Dan Uggla, saying he was "extremely disappointed" that they couldn't work out an extension with the second baseman. Loria was especially miffed that Uggla never budged in his demand for a five-year deal.

"We just kept adding more and more money," Loria said of the Marlins, whose final, take-it-or-leave-it offer of four years, $48 million was rejected by Uggla. "Dan is a wonderful kid, but I can't speak for the advice he gets."

Asked if he felt that Uggla's refusal to yield some on his original demand (five years, $71 million) was a sign he wanted out of South Florida, Loria replied: "I don't think he wanted out at all. I think this was what he was told he had to have -- five years. If somebody wants to give him five years, good luck to them. He's 31 years old. We could have set him up for a lifetime, several lifetimes."

Loria said fans should not be disappointed that Uggla was traded.

"Everybody gets excited about home run hitters," Loria said. "The home runs did not win enough games for us. It has a 'wow' effect. But, let me remind you, we have Mike Stanton for a full year (in 2011). He can hit a few home runs." 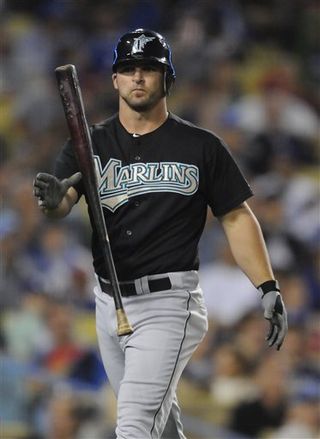 Loria said the Marlins likely aren't done dealing yet even though, over the past four days, they've completed three trades and are on the cusp of signing free agent catcher John Buck, making them the most active team in the majors by plenty.

"Stay tuned," Loria said, adding that more moves could be made to improve the bullpen even though the Marlins have acquired four relievers in the three deals. "We're not done yet. We lost 27 games after the seventh inning, 27 games! If we won 10 of those games because of the bullpen and four of them because of the defense, that's a different story. We're not fooling around. Defense, bullpen (are needs being addressed). We made four great strides in our bullpen already. And the infield is suddenly a different infield and, with Perry Hill coming, it will be a different and better situation."

Loria declined to specify why he gave only a one-year deal to manager Edwin Rodriguez, saying only that Rodriguez said he wanted to be given a chance and "it was the right thing to do." Loria said he thought Rodriguez did a good job after taking over from fired manager Fredi Gonzalez even though "he wasn't working with a full deck" due to a rash of late-season injuries.

"He said, 'Give me a chance,'" Loria said of Rodriguez. "And I thought about it. And I said, 'You know what, I am going to give you a chance.' He's not a household name, but he did a very nice job with these kids and they feel good playing for him. It was the right thing to do. We had to be fair. And to be fair, I thought 'I'm going to give you a chance.'"

Loria said he is pleased with the Marlins' starting pitching staff but did not rule out the possibility of the team going out to find another arm to fit into the rotation. Asked about reports that the Marlins could be interested in Arizona outfielder Justin Upton, Loria replied that it was the first he heard of it.

On the infield and rookie third baseman Matt Dominguez in particular, Loria had this to say:

"I don't want to put any pressure on the kid (Dominguez), but he's probably one of the best defensive third basemen around. He hasn't played yet. Can he hit? He can hit, but that's a touch-and-go thing, and he's gonna have to work his way through that. So if you put that defensive star at third, and you have Hanley (Ramirez) at short, (Omar) Infante and Gaby (Sanchez) at first, suddenly it all changes. Perry Hill is gonna work a little magic to it, too. It's an overhaul, but in the right direction."