Matt Sosnick, the agent for Ricky Nolasco, said he is "optimistic" that he and the Marlins will work out a multi-year deal for the right-hander.

"I would say certainly nothing's going to happen soon," Sosnick advised. "But I would be surprised if something didn't end up happening. We have had some conversations and I think we've made some progress." 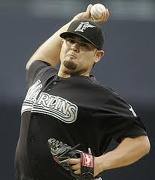 The Marlins are believed to be discussing a 3-year contract for Nolasco, which would buy out one year of free agency.

Perhaps most telling of all is that Sosnick said he is more confident that a deal will get done with Nolasco than he was at this same point a year ago when he was handling the negotiations for Josh Johnson. Those discussions ended up stalling over demands for a fourth year which, ultimately, the Marlins ended up granting to their ace.

Johnson, by the way, finished fifth in voting for the National League Cy Young Award, which was announced on Tuesday. Philadelphia's Roy Halladay was the unanimous winner, receiving all 32 first-place votes. The Cardinals' Adam Wainwright was second, followed by Colorado's Ubaldo Jimenez, Atlanta's Tim Hudson and Johnson.