Two down, two to go.

The Marlins on Monday avoided arbitration with two of their relievers by signing Leo Nunez and Edward Mujica to 1-year deals. Nunez will receive $3.65 milion plus peformance bonuses based on games finished. 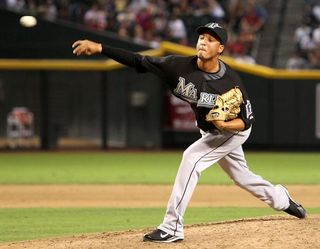 That leaves the Marlins with two arbitration-eligible players, starter Anibal Sanchez and reliever Clay Hensley. If the team is unable to work out deals with the two pitchers before noon Tuesday, they''ll exchange figures and go to arbitration to determine their 2011 salaries.

Nunez will enter spring training as the team's closer while Mujica is a key piece in the bullpen rebuild, obtained with fellow reliever Ryan Webb in the Cameron Maybin trade with San Diego.