There will be no arbitration acrimony involving the Marlins and any unsigned players in February. 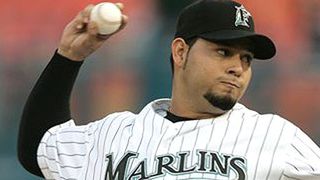 The team on Tuesday signed their two remaining arbitration-eligible players, with starting pitcher Anibal Sanchez and reliever Clay Hensley working out 1-year deals. Sanchez agreed for $3.7 million and up to $50,000 in performance incentives. Hensley agreed for $1.4 million, plus incentives worth up to $50,000.

Tuesday's signings coming one day after the Marlins worked out deals with two other arbitration-eligible pitchers, relievers Leo Nunez ($3.65 million) and Edward Mujica ($800,000).

Had the Marlins not reached agreement with those players, the sides would have exchanged salary proposals, with an independent arbitrator choosing one or the other following a hearing in February.