SAN FRANCISCO -- Less than 12 hours after he scored the winning run in the Marlins' 7-6, 12-inning victory over the Giants Wednesday night, Scott Cousins was still feeling "pretty crappy" over how he earned it. 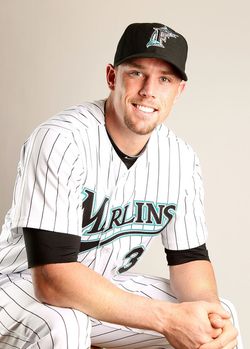 The reserve outfielder, who played at the University of San Francisco and lives in the Bay Area, fought back tears before Thursday's game in the Marlins clubhouse when talking about his collision with Giants catcher Buster Posey, who fractured his lower left leg and ankle trying to block Cousins from scoring.

"I'd like to say I don't care and we won, but I have compassion for that guy," Cousins said. "I don't want him hurt. He's a great player. He's a leader over there, a leader of that team, defending World Champion, Rookie of the Year. Did I want to end his season? No. Not at all."

Cousins, who said he didn't get a wink of sleep Wednesday, said he called over to the Giants clubhouse twice after Wednesday's game hoping to talk to Posey. But he was only able to leave a message with trainers. He said he urged them to relay the message to Posey. If he doesn't hear back, Cousins said he would try to reach out to Posey again after Thursday's game.

As for Cousins' family, friends and teammates? They've all been backing him.

"I've gotten messages from the front office, management, the coaching staff [Giants outfielder and former Marlins teammate] Cody Ross, players everywhere, family, friends," Cousins said. "I've gotten 65 text messages and Facebook postings saying I did nothing wrong. I understand it, got all the reassurance I need. But it's just still unfortunate and I can't help but still feel crappy about it."

Marlins manager Edwin Rodriguez reiterated Thursday he felt Cousins and Posey both made "clean, hard plays" and said his team was upset Posey was hurt.

Cousins said he still feels he made the right play. "It's part of the game," he said. "If you go in first feet and slide they punish you. If you hit them, you punish them and you punish yourself, but you have a chance of that ball coming out. And that's the difference, the only difference. But you still get punished.

"I got punished last night. I had full speed momentum going in there. But he's a big guy. He's bigger than me. It hurt a lot. It's just one of those things, it shouldn't be changed. It's part of the game. But you don't ever want to see anybody get hurt over it. You wish he could just, his legs would come out from under him and he could just roll over it, dust himself off and maybe even say something to me. I'll take it. But you don't want to see his leg get broken. That's the worst."