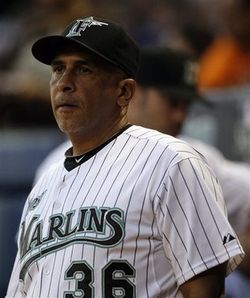 With the team staying at the Vinoy Hotel, a resort with its share of ghost stories, Nunez has flat out avoided staying there, instead opting to be a guest at the home of Rays reliever and friend Joel Peralta. Cishek, meanwhile, has had two rough nights getting any sleep. Cishek made Rodriguez roar with laughter when he told him how he heard pounding at his door at 3:30 a.m., followed by someone whispering his name.

"If the ghost can hit," Rodriguez said. "Let him know I'll give him a tryout."

With the Marlins mired in one of the worst losing skids in franchise history, Rodriguez is willing to do anything to get his team out of it. Saturday, he juggled his lineup and moved a struggling Hanley Ramirez down to sixth in the batting order. It's the first time since his rookie year of 2006, Ramirez, the NL's 2009 batting champion hasn't hit first, second or third in the Marlins lineup.

Rodriguez said he's tried everything to help the Marlins shake their hitting woes with runners in scoring position. From having the team's sports psychologist talk to each player individually to yelling, screaming and throwing things around the clubhouse himself. He said he's even tried meditation. But nothing has worked.

"I wish you guys could be in the dugout during the game. When guys struggle and come back to the dugout it's amazing," Rodriguez said. "Some of them, they're shaking because they're so mad. We tell them breathe in, breathe out. They literally have been like that. I don't want to put out names. But during the game we actually have to tell them to calm down. You talk about it and people say it's an excuse. You have to be here to understand what we're talking about.

"There's only so much you can do or say to the player. Bottomline when they go up there in front of 40,000 people yelling and screaming, and you're 21 and 23, it's hard to do. I think it's what's happening to them."

Rodriguez insists what's led the Marlins to dropping 19 of their last 22 games coming into Saturday have been the injuries to their best players -- ace Josh Johnson, Hanley Ramirez, setup man Clay Hensley and Nunez. He said young players are being asked to do more than they're ready to do. And a lack of leadership in the clubhouse is also hurting.

"That's another thing. We don't have -- we're lacking that veteran presence, a guy who will come and say come on guys, we need to step back and have some fun," Rodriguez said. "There's only so much a coach and manager can say. Coming from a player, one of them, it will be different. Like Luis Gonzalez or Carlos Delgado when he was here. Darren Daulton. We're lacking that."

"When we put together the team back in November we talked about JJ being the No. 1 guy in the rotation, Hanley being the No. 3 hitter, the run production guy, Leo being the closer, Hensley the setup. If any of those guys go down its going to affect the whole team. That's where the minor leagues come into play. We not only lost one or two or three, but four. The ace, three-hole hitter, setup and closer we're all down. How do you replace those guys? We don't have that. I don't think any organization has that where the ace goes down and replace the ace. That affected the team and the whole season. If you have an experienced team like St. Louis, when Wainwright went down, it doesn't affect as you as much. [Albert] Pujols, [Chris] Carpenter know how to handle that. This young team doesn't, they're still learning.</p>

<p>"Asking these young guys to step up and replace that -- I think they might do it, but they're putting too much pressure on themselves. We pretty much have the same team we had the first two months of the season, but not JJ and no Hanley. No coincidence we started losing when we lost Hanley. The talent is still there, but now the approach is different. They feel the pressure. It's a snowball."

As for Ramirez, Rodriguez said he's spoken to a lot of people around baseball to try and figure out why the Marlins $70 million man has fallen so off track.

"Nobody has the answer," Rodriguez said. "His swing is different, that's for sure. His swing is too much body, too much arm. The bat speed is at best average. So what it is, I don't know. I don't if he's off balance. I don't know if he's trying to hard. Nobody has an answer."

One National League scout in attendance Saturday said Ramirez's swing has simply gotten long and he's trying to make up for it by starting his swing earlier. Ramirez, who has bulked up over the years, has hit just .249 with 73 runs scored, 40 RBI and 12 home runs since he finished runner-up in the home run derby at last year's All-Star break.

"I think he needs to realize he's older now," Rodriguez said of Ramirez. "I didn't know him back then, but maybe he used to pick up the glove and bat a week before spring training and just start hitting. Now, he's getting a lit bit older now and it isn't the same. He needs to keep himself in good shape during the offseason. I don't know if that's the reason. Maybe he works out in the offseason. But that's my observation. He definitely needs to change his approach or whatever he's doing. During the season, during the offseason, whatever. Last year was a bad year for him under his standards. This year, it's not getting any better."