« With JJ, Hanley out Edwin Rodriguez said the Marlins have to play .500 ball to survive | Main | Marlins' first round pick, Tampa Alonso RHP Jose Fernandez, was once jailed in Cuba before finally fleeing with his family »

The Marlins have placed Hanley Ramirez on the 15-day disabled list, retroactive to May 30, with a lower back strain and replaced him on the roster with minor-league left-hander Brad Hand, who will make his major league debut on Tuesday as the starting pitcher. 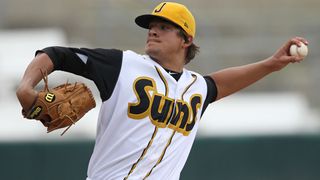 acksonville, striking out 44 with 27 walks in 63 2/3 innings. The 21-year-old lefty from Minneapolis was the Marlins' second-round pick in 2008. Catcher Kyle Skipworth was the team's first-round pick that year.

Ramirez would be eligible to come off the DL on June 14 when the Marlins open a four-game series in Philadelphia. It's the first time in his career that Ramirez has landed on the DL. However, he's been injured before and played in only two of team's final 17 games last season due to an elbow injury.

Ramirez said he would like to return on the earliest date possible, but as manager Edwin Rodriguez said, "Nobody knows, not even him."

The shortstop said his lower back is beginning to feel much better, and the tingling sensation in his left leg is gone.

"I think I feel better today, way better than yesterday and the day before," Ramirez said. "Today is the first day where I feel like everything is coming along. My lower back is getting looser and my hip is better."

Rodriguez said Ramirez could begin hitting off the tee within the next two or three days.

Part of the thinking behind putting Hand in the rotation -- over, say, one of the starters in Triple A -- is that he gives the Marlins a left-handed presence on the mound against a couple of upcoming teams featuring big lefty bats in their lineups: Atlanta on Tuesday and the Diamondbacks on Sunday.

Hand was stunned when Jacksonville manager Andy Barkett called him into his office and started going over the lineup for his next opponent, which was supposed to be Birmingham. But, instead of reading off the names of Birmingham hitters, Barkett threw out Dan Uggla and Chipper Jones, Braves hitters.

"He got a big smile on his face and said, 'You're pitching in the big leagues on Tuesday,'" Hand said.

ALL-STAR VOTING: You still won't find the name of any Marlin among the top five vote-getters at any position. The latest results for the N.L. All-Stars were released on Monday.

TONIGHT'S DRAFT: The Marlins pick 14th in tonight's draft. Asked who he would like to see chosen, Rodriguez joked: "I want whoever we draft to get in the rotation (immediately). We have a doubleheader in Philadelphia. We already have Hand. I just want another guy for next week."