The axe fell on hitting coach John Mallee, who was fired after the Marlins lost their seventh straight here tonight. But the five-hit performance by the revamped Marlins lineup wasn't what cost Mallee his job on Wednesday. The decision to replace him with former big leaguer Eduardo Perez, who has no major league coaching experience, was made before the game. 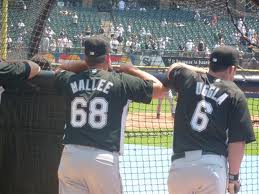 “We need to find a way to score some runs,” said Larry Beinfest, the Marlins' president of baseball operations, in explaining the decision to reporters outside the team's clubhouse. "We need to stop this. We need to win some ballgames.”

Because Mallee had been with the organization for 10 years and had worked with many of the Marlins' younger players as a minor-league hitting instructor, the decision did not sit well with some of them. Logan Morrison was the only one who expressed his dismay openly.

"I don't think it's right, I don't think it's just," Morrison said while standing in front of his locker. "It's definitely not his fault the reason that we're struggling right now to score runs. We let him down. We just haven't been hitting. And everybody's got their finger on the panic button, and it's hard to relax and play baseball."

Said Chris Coghlan: "I feel awful. I respect (the front office's) authority. But I will say, on Mallee's side, he's the best coach I ever had. He taught me my approach. He taught me how to hit. And he works his butt off. As far as a hitting coach, I've never seen anyone better."

Mallee became hitting coach for the Marlins when Jim Presley was fired, along with manager Fredi Gonzalez, in June of last year.

But Beinfest pointed out a number of deficiencies offensively.

"It's really just the execution with runners in scoring position, hitting behind runners, getting the bunt down, having some of the guys expand the strike zone," Beinfest said. "It kind of snowballed a little bit."

Perez, the son of Hall of Fame player Tony Perez -- a special assistant for Marlins president David Samson -- was a player for 13 seasons in the majors from 1993-2006. More recently, he has worked as an on-air analyst for ESPN's Baseball Tonight. He has also coached in Puerto Rico and in 2008 was named the Manager of the Year in the Puerto Rico Baseball League. He will assume his new role with the Marlins on Thursday.