« McKeon easing the mood in what was once a 'tight' Marlins dugout | Main | Marlins head off to Seattle with a happier, focused Hanley Ramirez »

JJ has ultrasound done on knee, skips Wednesday's bullpen, but Marlins say it shouldn't slow his return from DL

Josh Johnson, scheduled to throw his third bullpen session in his return from shoulder inflammation and the disabled list on Wednesday, only participated in three quarters of his normal throwing program according to pitching coach Randy St. Claire. 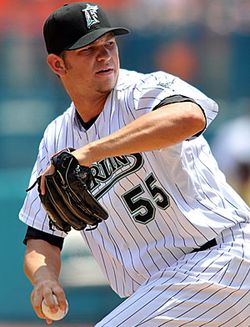 Johnson, who hadn't been with the team since Sunday in Tampa, had an ultrasound procedure performed on his right knee on Tuesday. The Marlins said he was cleared to return to his normal mound progression.

"His knee is still a little sore, but it's not bad," St. Claire said. "We'll see how he feels tomorrow. And if he feels real good we'll determine if he throws his [bullpen] or not. We'll work our way back from there."

St. Claire said the strength in Johnson's arm is returning and that he looked good during his bullpen session on Sunday.

"His last side he threw 35 pitches, fastball, changeup. Extension was real good. His fastball had life and zip to it through the zone and everything. It was real good," St. Claire said.

McKeon said he spoke to Johnson Wednesday and said the ace is still on target to make his return after the All-Star Break, either in the first series against the Cubs or the next against the game against the Mets July 18.