Before the Marlins fired hitting coach John Mallee after Wednesday's seventh loss in a row, I had a chance to speak with him on Sunday about the team's struggles at the plate in situational hitting. 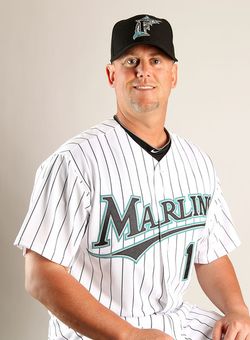 Mallee, who spent 10 years with the Marlins and had coached Gaby Sanchez, Logan Morrison, Chris Coghlan and Mike Stanton through the system, said he thought the recent struggles were just a part of the growth process of a young team.

"To be a good team you have to take productive outs and manufacture runs, going first to third, moving the running over, infield back/corners in, hit the ball up the middle to get the RBI.

"We do it everyday in batting practice. The first two rounds everybody hits the ball middle, the other way, to bring home the runner on second and nobody out. We rehearse it everyday. We do infield back, corners in, hit the ball to the middle of the field. Third round of batting practice is gap to gap, where you drive the ball in the middle of the field. Basically the whole day revolves around situational hitting. Right now, it's not a physical thing, it's a mental thing, an approach oriented thing.

"[Manager] Edwin [Rodriguez] said this spring he wanted us to master the obvious and the ability to execute with runners in scoring position is the key to baseball. When I came here it was a big emphasis. A lot of the guys were with me in the minor leagues and all we did was emphasize that. That's the way you win games. I think it's a part of the team, the way we think, the way we rehearse. They've been doing this for years and they know what they're supposed to be doing. There's no more trying here. We can't say we're trying. We need results and we need to execute."

The Marlins hired former major leaguer and ESPN baseball analyst Eduardo Perez, the son of special assistant Tony Perez, to replace Mallee. The younger Perez has never coached in the majors, but has managed in winter ball.

“He’s a baseball man, and everybody knows him," Marlins manager Edwin Rodriguez said of Perez Thursday morning on the radio show "First Pitch" on the MLB Network. "He’s been around. Although he doesn’t have much experience at teaching, as a coach, but he played in the big leagues for 13 years, so I think that’s good enough. You know better than anybody that experience, when you’ve played that long in the big leagues, I think you know what you’re doing. I think having Eduardo, he’s fully bi-lingual, he’s very smart, intelligent, so I think he’s going to be able to relay the right message.”

That right message begins with Hanley Ramirez, who before being sidelined with a back injury showed no signs of breaking out of his worst season in the big leagues. One can only wonder how much Ramirez's struggles in the end had to do with the Marlins firing Mallee, because the guys Mallee coached for most of their careers -- with the exception Coghlan -- have been carrying the team offensively this season.

Now, Perez will get his turn with Hanley. Let's see if he has the magic touch.