« Marlins' first round pick, Tampa Alonso RHP Jose Fernandez, was once jailed in Cuba before finally fleeing with his family | Main | Did Uggla's decision hurt Marlins and Braves? »

Marlins' 2nd Round Pick Has Some Fight To Him

Check out this video of the Marlins' second-round pick, left-handed pitcher Adam Conley. Seems Conley, who is out of Washington State U., doesn't mind mixing it up when the game turns physical, as it does on this play at the plate several years ago while he was still in high school. 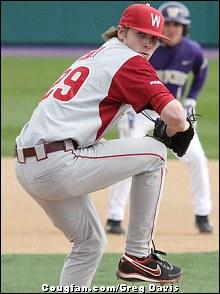 You can learn a little bit more about Conley in this feature article written about him.

Conley, who was rated as the 69th best overall prospect by Baseball America, went 6-7 with a 3.50 ERA as a junior at WSU last season. His coach, Donnie Marbut, envisions him as a late-inning reliever once he reaches the majors.

"I see him pitching the seventh and eighth inning for about 15 years in the big leagues," Marbut told The Olympian newspaper.

Conley was WSU's closer in 2010 before moving into the rotation this season. He features a mid-90s fastball, which he complements with a changeup, slider and curve. Here's a video profile of Conley put out by WSU.

The Marlins chose Conley today with the 72nd overall pick.