SEATTLE -- Not sure where this one ranks on the Marlins' list of headscratchers, but tonight's defeat was a dandy. Steve Cishek's wild pitch while trying to intentionally walk Carlos Peguero in the 10th enabled the deciding run to score in a 2-1 loss to the Mariners. 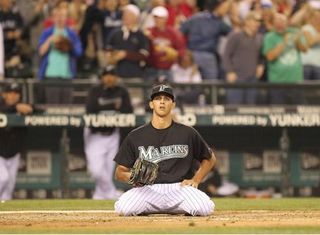 Manager Jack McKeon said he's never seen it happen in his 60 years of managing. Catcher John Buck, who was behind the plate when Cishek's third pitch to Peguero sailed wide right, said that, with the way things have gone for the Marlins, it's hard to imagine any more ways to lose.

"There can't be too many other ways (to lose), right?" Buck said. "We got that one crossed off the list, so hopefully that'll be it."

Cishek said the pitch just "got away." Thing was, Buck reacted so quickly once he saw the pitch was tracking nowhere close to him that he pounced on the ball quickly after it caromed off the backstop and threw to Cishek in time to nail Dustin Ackley, who was racing in from third. But Buck short-hopped the throw and Cishek couldn't come up with it to apply the tag.

Even stranger is this: after Ackley scored, Cishek ended up pitching to Peguero and struck him out  despite falling behind 3-0 with the wild pitch. Strange stuff.

It all added up to the 22nd loss of June, two more than the former franchise record. And there are three games left to play in the disaster of a month.

So tell me, what's the wackiest, most inexplicable Marlins loss that you remember?