Hanley calls Jeff Conine a "chicken," predicts he'll be the next "Mr. Marlin"

WASHINGTON -- One week after Marlins special assistant Jeff Conine made uncomplimentary remarks about Hanley Ramirez, the shortstop shot back with sharp words of his own, calling Conine a "chicken" and saying his goal now is to supplant the former player as "Mr. Marlin."

"I think he wants to be Mr. Marlin forever," Ramirez said of Conine, who was given that moniker during his eight seasons with the team. "It won't happen. I'm coming, baby. I think I'm going to be Mr. Marlin. That's my goal now. I wasn't thinking about that (before Conine's comments)." 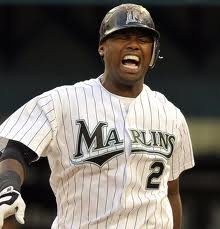 While being interviewed on The Dan LeBatard Show on 790-The Ticket last week, Conine said that, if it was up to him, he would trade Ramirez and gets frustrated with the shortstop "on a nightly basis."

"I think there are some nights where he doesn't try as hard as he should," Conine said, adding that he doesn't think Ramirez respects the game enough.

Ramirez said Wednesday that Conine should have spoken to him privately instead of airing his opinions of him on the radio.

"If he's got a problem, just come over and talk to me like a man," Ramirez said. "Don't be a chicken, talking on the (radio), because whatever you say is going to stay out there."

Asked if gets along with Conine, who is a special assistant to Marlins president David Samson, Ramirez replied: "I used to, yeah."

Ramirez said he was surprised at the timing of Conine's comments, and that he feels he is being unfairly labeled as someone who doesn't care or try hard enough.

"Why now?" Ramirez said. "There are a lot of worse guys than me out there. But nobody knows because nobody pays attention. When I'm on the field, I'm just being me. I'm playing my game. It's how I've got to play. Nobody's going to change me. What I get paid for is to win, respect each other, respect the organization. That's what I do." 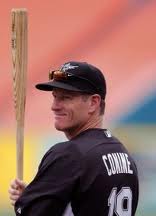 Ramirez is aiming higher than becoming known as the next Mr. Marlin. He said wants to remain with the team for the rest of his career, have his number retired, and go into the Hall of Fame as a Marlin.

"I'm going to make it to the Hall of Fame being in a Marlins uniform," Ramirez said. "This number (No. 2), nobody's going to wear it."

As for Conine, Ramirez said: "I'm still playing. I'm in the game. Where is he? I'm just happy to be in the game. I don't care what other people say."