« Marlins Demote Logan Morrison, Says he "Needs to Work at all Aspects of Being a Major Leaguer" ... Infante Should Return this Week, Hanley Not Likely | Main | LoMo's agent looking into possible grievance issue over demotion » 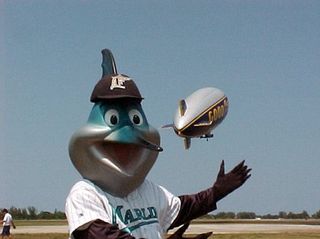 The Marlins got into a home run battle with the defending World Series champions on Sunday afternoon. It didn't work out well.

The Giants took two of three from the Marlins by winning the series finale 5-2 on Sunday, San Francisco getting all of its runs off balls that left the yard.

Former Marlins fan favorite Cody Ross got things started with a two-run shot in the third as the Giants handed the Marlins their ninth loss in 10 home games. Mike Stanton gave the Marlins their only lead with a blast to center field in the first inning.

Florida now embarks on a seven-game road trip to Colorado and San Diego. Going on the road may not be too bad considering the Marlins came into their long homestand with wins in six of eight on its previous road trip with visits to Washington, Atlanta and New York. The Marlins scored just 25 runs during their 10 game run in Miami Gardens.

“You can't score two runs, four runs in three games,'' said manager Jack McKeon, whose team was shut out on Saturday. “We'll be fine, but we're a different ball club. We're beat up. We're not making an excuse because these guys are major league players. We can't depend on one guy. We're going on the road and hopefully our offense gets going. Our pitching has been relatively good.''

San Francisco entered the day with 77 home runs – ranked 12th in the National League – but belted four on Sunday. Chris Volstad (5-9) surrendered three of them in his five innings. Brandon Belt, recently recalled from Triple A Fresno, got his second of the day in the eighth off Michael Dunn.

Volstad gave up a total of seven hits, walked two and struck out seven in his short outing.

“I think they hit four balls into the air and three of them went over the fence,'' Volstad said. “Everything else was on the ground or strikeouts. That's just the way it goes sometimes I guess.''

Giants starter Ryan Vogelsong (10-2) had a fairly easy outing. The Marlins didn't get their third hit of the day until new cleanup hitter Greg Dobbs singled in the seventh. Vogelsong had retired 17 straight prior to that.

Vogelsong eased his way through seven innings and change before Emilio Bonifacio doubled to left with two outs in the eighth to score Bryan Petersen after he walked to lead off the frame.

Vogelsong walked Alfredo Amezaga, prompting manager Brian Bochy to bring in Santiago Casilla. The Marlins had both Bonifacio and Amezaga in scoring position after Casilla's first pitch got past catcher Eli Whiteside, but the threat came to a close when Stanton grounded to third.

Brian Wilson didn't leave the bullpen – his 35 saves are second most in baseball – as Casilla got the first two outs of the ninth before turning things over to Jeremy Affeldt with a runner on. Affeldt walked pinch-hitter John Buck with Ramon Ramirez coming in as the third pitcher of the inning. Ramirez struck out Brett Hayes for his second save of the year.

Prior to the eighth, the only problems Vogelsong seemed to encounter came when he was batting. He wasn't happy about being plunked by Marlins reliever Burke Badenhop with one out in the seventh. Badenhop said “that's the last thing I wanted to do.''

After being hit, Vogelsong threw down his bat and turned toward the mound. Marlins catcher Brett Hayes stepped in and escorted Vogelsong to first base, choice words offered by both. Once he got there, first base coach Roberto Kelly and Gaby Sanchez continued to try calming him down.

Vogelsong moved into scoring position on Ross' single, but Jeff Keppinger grounded into a double play to end the threat.

“He reacted, but who wants to hit Vogelsong? Come on,'' McKeon said. “If you're going to drill some one, it would be the big guy. Maybe we should have drilled him. No big deal. Guys get carried away. Vogelsong, Volkswagen -- whatever his name is – he's lucky he didn't have to face Gibson or Drysdale or one of those guys and get a haircut and a shave. He would have gone down the next time.''