SUN LIFE STADIUM -- Marlins third base coach Joe Espada isn't considered the front-runner to be the team's next manager when they open their new stadium. 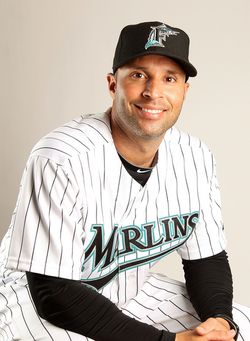 But at the very least, he received a courtesy interview Monday morning.

"We sat in the office and had a really good conversation," Espada said of his meeting with owner Jeffrey Loria and team officials. "We spoke about a variety of issues. I thought it went really well. My second one. I felt more comfortable. I feel like I'm more ready for the job.

"I've been part of this organization now for six years between the minor leagues and big leagues. I feel like I know these players, I know what they need. I'll be a good leader. Hopefully it works out."

The Marlins, who clinched last place in the National League East when they were swept by the Brewers over the weekend, are expected to make a hard run at White Sox manager Ozzie Guillen -- if he becomes available. Nationals third base coach Bo Porter, the Marlins' third-base and outfield coach from 2007 to 2009, also was interviewed Monday.

Espada said whoever gets the job will have a good team to manage -- once ace Josh Johnson and three-time All-Star shortstop Hanley Ramriez return from injuries.

"There's a lot of good things happening here," Espada said. "Sometimes we look at our record and it wasn't a very productive season. But there's a lot of good things happening here. We have a good core of young players. We have a strong foundation for us moving forward. Guys like [Emilio] Bonifacio who turned out to have a great season. We were always looking for a true leadoff guy. I think he's turned the corner. We have Michael Stanton, Logan Morrison, a healthy JJ, a healthy Hanley. That's a strong foundation. Maybe we get a couple veterans to anchor their development and be on pace to be successful in the [National League] East."

Espada said Loria "asked some good questions" during the interview and was clear about what he wants in his next manager.

"I've had an opportunity to be around three managers," Espada said. "You learn a little bit from all those guys. Just being around the league I think I feel more comfortable. I feel like I'm ready to do it if they ask me to do it."

Javi Vazquez, who turned out to be the Marlins most dependable and best pitcher this season after a rough start, said he's going into his final start of the season Tuesday against the Nationals not necessarily thinking it will be the last start of his career.

Vazquez, 35, said back in August he was leaning toward retirement to spend more time with his family in Puerto Rico. But he's not closing the door yet on changing his mind.

"I hate to come to a decision during the season. It's kind of tough. It's better to make a decision two or three months after the season. You get to relax a little bit and see what you really want," Vazquez said. "I'm still leaning towards [retirement]. It's not changed me -- the way I've pitched."

Since starting the season 3-6 and seeing his ERA soar to a major-league worst 7.09 on June 11, Vazquez has gone 9-5 with a 1.91 ERA over his last 18 starts -- proving the Marlins made a sound investment, giving him a $7 million contract for one year. Vazquez’s 1.92 ERA since June 12 ranks fourth in the majors. The only other pitchers with better averages during that span are Clayton Kershaw, Cliff Lee and Justin Verlander.

So could Vazquez picture himself pitching as a Marlin in their new stadium in 2012? "If you put a photo there I could," he joked. "But no. I haven't made my mind up yet."

John Baker, who had Tommy John surgery in the summer of 2010, caught the final three innings of Sunday's game in Milwaukee for the Marlins -- the first time he'd been behind the plate for them since May 12, 2010.

"It was awesome," Baker said. "My favorite part about baseball was being behind the plate -- especially in that environment. It's really cool to play a team that's going to the playoffs and have 40,000 people at the stadium."

Baker, 30, said he was beginning to think the possibility of him catching this season wouldn't happen.

"We had a game in Pittsburgh where we up big and I thought man this would be the perfect time, but it didn't happen," said Baker, who was reinstated on Sept. 5.

"Obviously, I'm not the manager. But I thought I could give [John] Buck a couple innings off. But when they asked me yesterday if I was ready to play I said 'I've been ready since I got here to play.' It was pretty sweet."