From the that's a pretty cool story department: 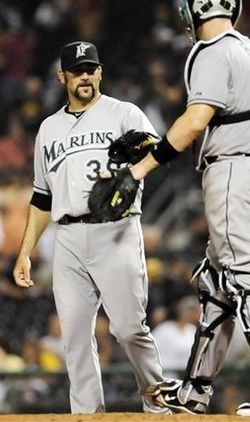 Marlins reliever Chris Hatcher received a surprise package in the mail Monday at Sun Life Stadium. Inside the package: an American flag, a picture and a letter from a soldier serving overseas who felt compelled to thank Hatcher for tossing his 13-year old son a baseball at Wrigley Field right before he was shipped off to Kuwait.

"This is actually pretty cool," said Hatcher, whose father's father died serving the country. "I opened it up and said what is this?

"I'm going to hang it proudly. What else can I do? What those guys are doing for us -- they're giving us freedom. We're worried about strikeouts. They're worried about ducking and covering."

Joseph Hjelmstad of Battle Lake, Minnesota, a First Sargeant serving at Camp Buehring, a staging post for U.S. troops in the northwest region of Kuwait, sent Hatcher a picture of his son Joey holding the baseball at the game with a big smile on his face. The flag came with a certificate of authenticity that said it had been taken on patrol covering 780 miles in Iraq from Aug. 27-30 with stopovers at three different U.S. military bases.

"I remember him giving me the rundown [at the game]," Hatcher said. "He told me he was about to get sent back over. I said 'Are you serious? I've heard that before.' He said, 'When you asked it showed you actually cared about the troops.' So, I flipped his son a ball. Then this showed up today.

"Pretty nice gesture on his part. The least I could do was flip a ball to whose dad was about to go do dodge bullets."

The Marlins have gone overseas the last two off-seasons to visit troops. Hatcher said if the Marlins plan another trip this coming off-season, he'd "go in a heartbeat, no questions asked."

Hatcher said he plans on sending Hjelmstad an email thanking him for the flag and photo.

JOHNSON WILL THROW SIMULATED GAME THURSDAY: Since Josh Johnson went on the disabled list with shoulder inflammation May 17, the Marlins have treaded carefully to return him to full health -- just for peace of mind over the winter.

Monday, Johnson took another step forward when he threw a 50-pitch bullpen session at Sun Life Stadium, mixing in fastballs, change-ups and sliders. Next up: his first simulated game since going down. He'll throw to up in Jupiter, one on Thursday, followed by another on Sept. 27.

"After that, we'll shut it down, go into off-season mode, take a couple weeks off and go back to what I've been doing," said Johnson, who has been throwing bullpen sessions every three days.

Johnson said he "definitely" envisions himself pitching Opening Day at the Marlins new ballpark in April.

But does he feel like he's in the clear totally yet? Doesn't sound like it. "I'd like to see hitters. It is different when you see hitters. The adrenaline starts to flow and you start to put a little more on even when you don't feel like you're putting more on it.

BRAD HAND WILL NOT START AGAIN: Sunday's four-inning performance in a 4-3 loss at Washington turned out to be the last scheduled start for Brad Hand this season.

Marlins manager Jack McKeon said the team will give right-hander Alex Sanabia the ball in Hand's place in the rotation Saturday in Milwaukee.

Hand (1-8 with a 4.20 ERA) has thrown a career-high 173 2/3 innings (60 with the Marlins) this season. Hand said his arm feels fine, "good enough to go at least one more time." McKeon said Hand isn't necessarily done for the season.

"We just one more start left and we're going to see the other kid," McKeon said. "We're not going to send him to the woodshed or send him home. He'll be here. But he just won't start."

Sanabia, injured at the start of the season, gave the Marlins six solid innings against the Phillies in the second game of a double-header last Thursday.