Marlins checking on Dobbs and Vazquez, but not Lopez

The Marlins are gauging interest in resigning two of of their free agents -- Greg Dobbs and Javier Vazquez -- but not the third, infielder Jose Lopez. Barring an unexpected change of heart, Vazquez is almost certain to retire.

Dobbs, on the other hand, is enticing. His value would be as a lefty bat off the bench and insurance at third base, where he started 84 times last season. He also saw action at first base and the corner outfield spots. Dobbs re-established himself at the plate after two unproductive seasons, hitting .275 with 31 extra-base hits.

In the past, the Marlins would have considered Dobbs a luxury they could not afford, as they did when they allowed Ross Gload to walk following a successful 2009 season with the Marlins. Gload ended up signing a 2-year deal with the Phillies for $2.6 million. But with plans to increase payroll, the Marlins are probably more willing to keep Dobbs.

The Marlins have exclusive negotiating rights with their three free agents until 12:01 a.m. Thursday.

The Marlins are expected to announce their 2012 coaching staff for new manager Ozzie Guillen within the next couple of days, and first base/infield coach Perry Hill will not be on it. Hill spent most of the past season hobbling about on bad knees and was given time by the team to decide whether he felt he could continue in the role. But after giving it careful consideration, Hill has apparently told the club he can't go on. Pitching coach Randy St. Claire, third base coach Joe Espada, hitting coach Eduardo Perez and bullpen coach Reid Cornelius are returning. Guillen is bringing Joey Cora with him from the White Sox to be his bench coach. The Marlins will name a new first base coach to replace Hill.

The Marlins are teaming up with a South Beach icon to bring a party atmosphere to their new stadium. 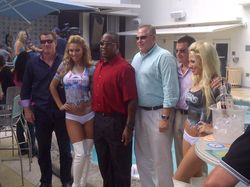 The Clevelander has partnered up to open a satellite club behind the left field wall in the area formerly known as "La Playa" adjacent to the Marlins bullpen area. In addition to poolside entertainment that will include dancers and DJs open to approximately as many as 120 party goers, there will be Field Level seating and table service available featuring food selections from the South Beach location.

"We don't want anyone to get lazy and to think that just because we have an incredible new retractable, air conditioned ballpark that we can just stand back and not worry about anything else," team president David Samson said. "We want to win. We want to win every year. We want to build a dynasty. We want to be around for a long time. We want this ballpark to be different.

"The Clevelander is an example. It's just not done anywhere. And you can't do this in most cities. But in Miami you can. So why not take advantage of where we are. We don't need fire places. We need an entertainment venue and that's what we have."

Samson and Mike Palma, General Manager of The Clevelander, said the area will be open before and after games, and on non-game days, as late as 3 a.m. Individual tickets to the area will be available when the area is not bought out for private parties. Palma said he anticipated the area at the stadium will open March 30th when the team plays the first of two games against the New York Yankees.

"There are some places where bars have tried to get involved [with teams]. But nobody is going to do what we're going to do," Palma said. "We'll be on the field and we're going to create a sense where you integrate yourself onto the field, but also be entertained and drink and eat. The food won't be from the concession stand. It will be unique."

Samson said Thursday's announcement will be the first of many by the Marlins over the next few weeks and months as they move into their new stadium and rename themselves the Miami Marlins. Samson said naming rights to the stadium will not be announced on Nov. 11, the day the team plans to unveil its new uniforms.

Just when you thought the Marlins had used up all their "creativity" on their new logo, they've gone out and stunned us again.

The "new mechanized sculpture that will activate when the team hits a home run" at the new ballpark according to a Miami-Dade Cultural Affairs website made its debut today.

And there really are no words to describe it. Stomach it if you can... (FYI, Click on the picture to see it in action. It will move and show you how it is supposed to work).

Marlins owner and art dealer Jeffrey Loria promised in 2009 the team’s new ballpark would be a work of art and unlike any other baseball stadium. It looks like that will be the case -- for better or worse. This "piece of art", budgeted at $2.5 million, is the work of renowned multimedia pop artist Red Grooms.

Grooms, who was born in Nashville, said in 2009 he gathered his concept for the home run celebration on his memories of visiting Daytona Beach as a teenager and how what it was like seeing the ocean for the first time.

Home runs are celebrated various ways at ballparks across the country.

At Miller Park in Milwaukee, following every Brewers home run, mascot Bernie Brewer makes a splash in the "Kalahari Splash Zone" area, which sends an explosion of water into the air and onto fans below.

At Minute Maid Park in Houston, a train moves along a track on top of the length of the exterior wall beyond left field. The engine's tender, traditionally used to carry coal, is filled with giant oranges in tribute to Minute Maid's most famous product, orange juice.

At Citi Field in New York, when a Mets player hits a home run, the giant apple, which has a Mets logo on the front that lights up, rises from its housing beyond the center field wall.

At Great American Ballpark in Cincinnati, two smokestacks in right field, reminiscent of the steamboats that were common on the Ohio River in the nineteenth and early twentieth centuries, flash lights, emit smoke and launch fireworks.

After a White Sox hit a home run at U.S. Cellualar Field, fireworks go off, the scoreboard lights up and a pin wheel spins.

And at Petco Park in San Diego, every time the Padres hit a home run, a foghorn is sounded and fireworks are shot off in center field. The foghorn is a recording of the horn of the Navy's USS Ronald Reagan, a nuclear aircraft carrier that is ported in San Diego.

Some fall housecleaning news. The Marlins on Wednesdsay cleared out a couple of spots on their 40-man roster by outrighting reliever Brian Sanches and outfielder/catcher Vinny Rottino. Sanches was also eligible for salary arbitration for the first time and removes that decision for the Marlins.

Sanches was a generally reliable bullpen workhorse for the Marlins over the past three seasons, totaling 145 relief appearances. He also made two spot starts this past season. Overall for the Marlins, he was 10-5 with a 2.92 ERA.

Though his 2011 numbers weren't quite as strong (3.94 ERA), part of it could be attributed to three outings, in particular: his two spot starts and an excruciating-to-watch mop-up appearance on July 5 when he covered the final three innings in a lopsided loss to Philadelphia. Sanches, who was visibly angry afterward and slammed his glove in the dugout, coughed up six runs and threw a whopping 78 pitches. If those three outings are removed from his record, Sanches had a 2.70 ERA.

Sanches figured to make about $1 million next season through arbitration. Assuming he declines his assignment to the minors, he'll now be eligible to explore the market through free agency. Rottino was a late-season callup from the minors.

The moves leave 38 players on the 40-man roster.