A rotation for the record books and a wedding dress

Not that this should matter one iota in the big picture, but the Marlins are now positioned to become the first team in big-league history to start a season with three pitchers in the rotation with a no-hitter on the resume: Carlos Zambrano, Mark Buehrle and Anibal Sanchez. 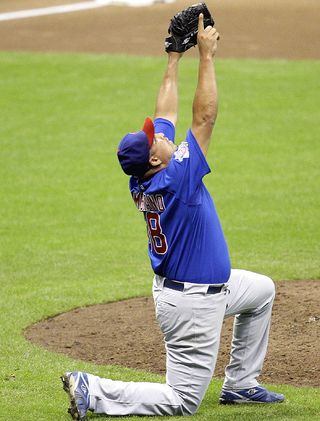 The always incomparable Elias Sports Bureau did some checking for me and came up with only two other teams with three no-hit starters: the 2005 Yankees with Randy Johnson, Kevin Brown and Al Leiter and the '05 Dodgers with Derek Lowe, Scott Erickson and Wilson Alvarez.

But Alvarez wasn't a regular member of that Dodgers rotation. He didn't join that team until May, spent most of the time in the bullpen, and made only two starts. And Leiter, as folks around here might recall, was bust for the Marlins in '05, released, and picked up mid-season by the Yankees, with whom he closed out his career.

Here's the Cubs' take on the Zambrano trade from Theo Epstein, their new president of baseball operations. Epstein said that the pitcher had lost the trust of teammates with his numerous outbursts. Epstein said he spoke to various players to get a read on the situation before deciding to deal Zambrano.

"I'll just say that the people who have been around the situation over the years heard before there would be change," Epstein told reporters Thursday after the trade was announced. "They heard before there would be a new attitude, and they have been burned. Physical altercations, deserting the team, that type of thing. The best way to put it is there was a breakdown of trust. It would have been very difficult to re-establish that trust."

Chris Volstad said he was mildly surprised -- but not completely shocked -- by the trade. After all, the Marlins had made no secret of their efforts to strengthen the rotation, and Volstad was low man on that totem pole. Why, when the Marlins unveiled their new uniforms in a ceremony in November, Volstad was a notable omission from the lineup of player/models. He wasn't invited to participate.

"I can't say I'm 100 percent surprised, no," Volstad said. "That possibility was always in the back of my mind. They (the Marlins) have a lot of big plans and stuff they wanted to do."

Volstad said he feels he can help the Cubs based on improved outings toward the end of the season after a brief stint at Triple A. While Volstad went 0-5 after his return from New Orleans in August, he had a 3.48 ERA in his nine starts (compared to his final ERA of 4.89). He held opponents to two runs or less in each of his final six starts while giving up only two home runs during that stretch.

"I was basically a new pitcher at the end of the season when I came back up," Volstad said. "I started over, basically, Just made it simple and went back to my roots."

The Marlins will make a strong push for Yoenis Cespedes once the 25-year-old outfielder and Cuban defector is granted free agent status. But the competition is expected to be hot and a lot of teams are lining up to make a run for him.

President of baseball operations Larry Beinfest said the Marlins "were very impressed" with Cespdes.  "Obviously, as a Cuban, I think it would be an interesting fit in this market and on this ballclub," Beinfest said.

In the meantime, Beinfest said Emilio Bonifacio is "the leader of the pack" among a "bunch of different guys" who can play center, a group that also includes Chris Coghlan, Bryan Petersen and Scott Cousins.

Mike Stanton will be among the guests when radio man Glenn Geffner hosts his weekly "Marlins Insider" Saturday on 790-The Ticket. Also scheduled to appear: ESPN Chicago's Bruce Levine to offer his perspective on Zambrano and Ozzie Guillen, whom he covered in the Windy City.

Celebrity alert. Chad Gaudin, the well-traveled pitcher the Marlins have signed to a minor-league contract and invited to spring training, is married to the former Syndal Gorden, who appeared on TLC network's "Say Yes To The Dress." Wives of Yankees players helped her pick out the $10,000 gown during the 2010 season when he was with New York -- that according to my wife, who watches the show. 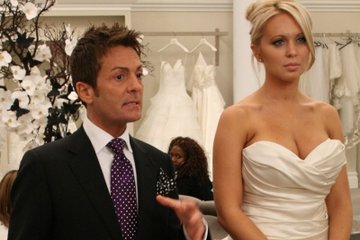