Think it's probably safe to say that the Marlins are the sexiest team in baseball at the moment, what with their new ballpark, manager, etc. etc. etc. Sports Illustrated has made them their cover story this week with a shot of Ozzie Guillen and Jose Reyes staring off of newsstands.

It's not the first time the Marlins have made the SI cover. They were featured there after each of their two World Series titles of course, as well as in 2007 when Dontrelle Willis was out front. Her 'tis: 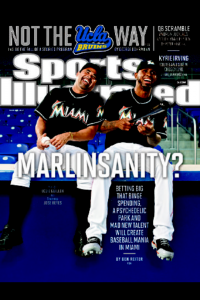 On another front, Mike Stanton has decided that, from now on, he wishes to be introduced by his first name, Giancarlo. His full name is Giancarlo Cruz-Michael Stanton. The team's media guide will now identify him as Giancarlo Stanton, and that's how he'll be introduced over public address systems whenever it's his turn to bat.

JUPITER -- Ozzie Guillen isn't sure whether he'll start the season with 13 or 12 pitchers, in part due to the uncertainty surrounding Juan Carlos Oviedo. But Guillen joked that if Oviedo makes it back soon and earns a spot in the bullpen, he'll effectively be gaining two pitchers in one.

Playing off the fact that Oviedo pitched for years using the name Leo Nunez, Guillen said he could have Oviedo pitch the seventh inning and Nunez go in the eighth.

"What's the guy's name, Nunez and Oviedo?" Guillen said. "(If) they come here, then we got a pitcher for the seventh -- Oviedo for the seventh -- and Juan Carlos Nunez for the eighth," he said to laughter in his office following today's workout. "We got two guys in one. We go with 13 pitchers in 12 bodies."

On a more serious note, Guillen said oft-injured Josh Johnson will "dictate" how much he pitches. The manager said there's probably no reason to leave Johnson in a game in which the Marlins are either leading or trailing by six runs, or thereabouts.

"I don't want him to go out there and be a hero, and then all of a sudden we lose him for the next 20 days," Guillen said. "I'd rather lose him for two or three days than 20 or 21 days. I'm not going to say we have to be careful for him, but we have to watch him pretty close.

"In my mind, I got his man throwing 200 innings and winning 21 games. If we're up by so many runs in the seventh, why should we make this kid throw 110 (pitches) when he should throw 90? It depends how he goes."

How will Hanley fare this season, at 3B and at plate?

JUPITER -- Hanley Ramirez has been taking ground ball after ground ball at third base as the Marlins continue to groom him for his new role. Ozzie Guillen has said repeatedly not to expect defensive wizardry from the former shortstop but never fails to add that Ramirez should at least be adequate.

I think the bigger question mark is his bat. Ramirez has lost close to 100 points off his 2009 league-leading .342 average, dipping to .300 in 2010 and a disconcerting .243 last season. It's possible the attention he must now devote to learning his new position will remove some of the pressure off him at the plate. Then again, it's also possible that if his struggles with the bat continue, it could spread to his fielding -- and vice versa.

This much is certain: it will be interesting to observe and follow. Check out some video of Ramirez taking ground balls at third (while also wearing the team's new home whites), and give us your thoughts on how you think he'll perform this season. By the way, that's Jeff Dominguez -- not Matt -- working with Hanley at third:

Posted by Clark Spencer at 9:03 AM | Permalink | Comments

Marlins set rotation for Grapefruit League -- and beyond?

JUPITER -- The Marlins have set their rotation -- tentatively, at least -- for the start of Grapefruit League play, with Josh Johnson taking the mound Monday against the Cardinals.

Mark Buerhle is down to pitch March 6 when the Marlins face the University of Miami at their new ballpark. The following night, Ricky Nolasco will be on the mound to take on Florida International University, also at the new ballpark. Carlos Zambrano will make his first spring start on March 8 against the Mets in Port St. Lucie while Anibal Sanchez will round things out on March 9 against the Nationals here in Jupiter.

In explaining his decision not to have Johnson go against either of the two college teams, manager Ozzie Guillen joked: "I don't want to make those kids look like (expletive) when they face J.J. Make sure those kids know they have a chance in the big leagues. If they see J.J., they might quit. They might stay in school."

Mike Dunn clamping down on dingers

JUPITER -- After giving up nine home runs in only 63 relief innings last season, southpaw reliever Mike Dunn is working on two pitches he believes will reduce the power onslaught: a change-up and a two-seam fastball to go with his four-seamer and slider. In particular, Dunn wants to show something different to right-handed hitters, who accounted for seven of the nine home runs hit off him.

"It's no secret the righties got me last year," Dunn said. "I never gave up that many home runs in one season. They got me." 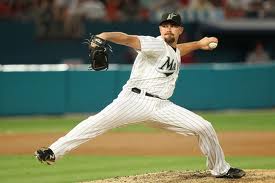 Dunn said both his two primary pitches -- the four-seamer and slider -- cut in on right-handers. The change-up and two-seamer go away from right-handed hitters. He said he started experimenting with the two pitches during the second half of last season, and the results showed.

After serving up seven home runs before the All-Star break, Dunn gave up only two home runs after July 6, and both of those shots were hit by left-handed hitters: the Giants' Brandon Belt and Philadelphia's Ryan Howard.

Dunn spent the offseason perfecting the two offspeed pitches so that he can put them to greater use this season. He and Josh Johnson worked out at the the University of Nevada-Las Vegas.

"Are they going to be my top two pitches? No." Dunn said. "But we're going to use them more and more this year. The change-up is a good pitch to throw, maybe on the first pitch, to put it in their head, to get it in the book that, 'Hey, Dunn's got a change-up. He might use it.' It's just another weapon. It's definitely to keep the ball in the park because, if you keep the ball in the park, you've got a chance. I have seven guys standing behind me."

Posted by Clark Spencer at 8:51 AM | Permalink | Comments

JUPITER -- Ozzie Guillen addressed the club in a 30-minute, closed-door speech this morning, after which the Marlins hit the back fields at Roger Dean Stadium for their first full-squad workout of spring training under a gray sky.

Jeffrey Loria spoke with reporters as he's done on this day in each of his 11 spring trainings as Marlins owner. I asked how long he intends to maintain ownership of the Marlins. His response: "As long as I live. I love this team"

Only newsworthy event of the first workout was Chris Coghlan being hit in his right elbow by a Jose Alvarez pitch during live batting practice. Coghlan ended his hitting session and was taken to the training room, but said later he should be OK.﻿

JUPITER -- Never mind that, as they enter their 20th season, the Marlins have never won a division title. Forget that they finished in dead last in 2011, 30 games behind the first-place Phillies. With all of the bold moves made over the winter, utility man Greg Dobbs thinks the Marlins should be considered "the team to beat" in the National League East.

Dobbs arrived at spring training a year ago trying to re-establish his career. A non-roster in invitee, Dobbs not only made the club, but ended up playing a large role for the Marlins, appearing in 134 games while hitting .275. He said he explored all his options as a free agent after the season, but decided ultimately to return to the Marlins on a two-year deal.

"The front office -- ownership -- made some big moves, some huge huge moves," Dobbs said. "As I saw that happening throughout the winter, I kept thinking to myself more and more, it's just going to be a much more exciting place to play, with a lot of expectations and a lot of promise. Ultimately, I was very fortunate this ended up being my home again for two years.

Posted by Clark Spencer at 9:59 AM | Permalink | Comments

JUPITER -- Received word today that former major league right-hander Terry Mathews, who pitched for the Marlins from 1994-96, died at his home in Louisiana of an apparent heart attack. He was 47. Mathews spent eight seasons in the majors with the Orioles, Rangers, Royals and Marlins, compiling an overall record of 22-21 and 4.25 ERA. While with the Marlins, Mathews received the nickname "The Body" because he entered games at Joe Robbie Stadium to the Village People's "Macho Man." Mathews appeared in 138 games (two starts) for the Marlins, going 8-9 with seven saves before being traded to Baltimore on Aug. 21, 1996, for a player to be named later, which turned out to be catcher Gregg Zaun.

The Marlins signed Mathews as a free agent in November of 1993. Oddly enough, even though he was a pitcher, and primarily a reliever at that, Mathews swung a pretty good bat. He went 9 for 19 at the plate for the Marlins.

If you have any memories of Mathews, or even that era of Marlins history, feel free to share them....

Wednesday's bullpen pitchers were back on the bump this morning for another go-around. With Ozzie Guillen looking on, Carlos Zambrano takes his turn on the mound:

Posted by Clark Spencer at 11:22 AM | Permalink | Comments

The spotlight is off Matt Dominguez

JUPITER -- A year ago, Matt Dominguez was the biggest spring training story going for the Marlins, battling to win the job at third base and an Opening Day roster spot. He didn't succeed. Now, Dominguez is just one of the 60-something players squeezed inside the cramped clubhouse, a largely overlooked figure on a team that -- all of a sudden -- has its share of luminaries.

"A little different feeling from last year to this year," Dominguez acknowledged.

When the Marlins signed shortstop Jose Reyes and moved Hanley Ramirez to third, that took care of that as far as Dominguez was concerned. There's no place for him to go except Triple A New Orleans. Not that it is the end of the world for Dominguez, the former first-round pick. He's only 22.

"Everybody knows how good Reyes and Hanley are," Dominguez said. "That's a great left side of the infield."

Dominguez just wishes he was included in it, or even in contention for a job. That's not the case.

"Last year I was competing for a job," he said. "Of course, it's different. Everybody wants to play in the big leagues. I'm not trying to play Triple A my whole career."

Dominguez's future with the Marlins is now one gigantic question mark. Ramirez is signed through 2014, so unless the Marlins trade him, Dominguez's path to the Marlins is blocked for several years to come. He could end up becoming a trade piece himself, but must first prove that he's not just a good glove guy.

Posted by Clark Spencer at 8:42 AM | Permalink | Comments