JUPITER -- Received word today that former major league right-hander Terry Mathews, who pitched for the Marlins from 1994-96, died at his home in Louisiana of an apparent heart attack. He was 47. Mathews spent eight seasons in the majors with the Orioles, Rangers, Royals and Marlins, compiling an overall record of 22-21 and 4.25 ERA. 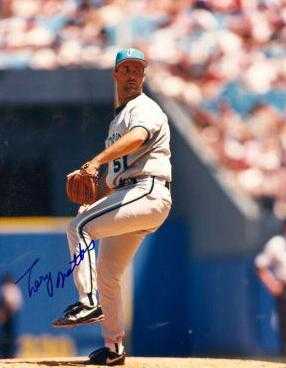 While with the Marlins, Mathews received the nickname "The Body" because he entered games at Joe Robbie Stadium to the Village People's "Macho Man." Mathews appeared in 138 games (two starts) for the Marlins, going 8-9 with seven saves before being traded to Baltimore on Aug. 21, 1996, for a player to be named later, which turned out to be catcher Gregg Zaun.

The Marlins signed Mathews as a free agent in November of 1993. Oddly enough, even though he was a pitcher, and primarily a reliever at that, Mathews swung a pretty good bat. He went 9 for 19 at the plate for the Marlins.

If you have any memories of Mathews, or even that era of Marlins history, feel free to share them....