JUPITER -- Of the five pitchers chosen by the Marlins in the first round of the ballyhooed 2005 draft, Sean West is the last man standing. But West's days with the club could be numbered, too. The tall lefty is out of minor-league options and, in his words, said spring training is "make it or break it time" for him as far as the Marlins are concerned. 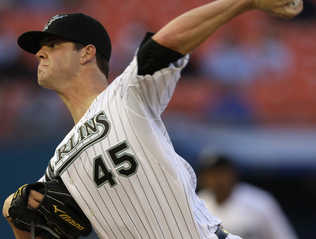 That's not going to be easy. Barring injury, the five-man starting rotation is set. Most of the bullpen spots are accounted for, as well. But injuries do happen and the long relief role is up for grabs. Though he has virtually no relief experience (three relief appearances in 94 career minor-league outings), West says he's up for that job.

What gives the southpaw hope is the renewed life in his arm, which underwent repair after last season. West said Dr. James Andrews performed an elbow cleanup and the results have been spectacular -- just as Andrews predicted they would be.

"I was in (the hospital) bed, just regaining consciousness, and he comes up and says, 'I've done a lot of these, but I've never seen one that's going to impact a player's career like yours,'" West recalled. "That felt good to hear that, coming from him."

West, 25, can vouch for Andrews' work. He said his arm hasn't felt this good since he was in high school.

"I can't even explain how good my arm feels right now," West said. "I have that a zip on the ball again. It’s coming out like it did in high school. It’s an amazing feeling, expecially going into a camp like this."

West was on the rise at one time. He made 20 starts for the Marlins in 2009, going 8-6 before fading into an afterthought. West has only five weeks to show the Marlins he still belongs. If not, there's a strong chance he'll wind up somewhere else.

Pitchers and catchers are taking their physicals this morning, after which they'll hold their first structured workout.