JJ set for second to last spring start vs. Rays

PORT CHARLOTTE -- Josh Johnson is going to make his next-to-last start of the spring this afternoon against the Rays as the Marlins look to pick up their first Grapefruit League win since March 15. They are 0-7-2 over their last nine games. 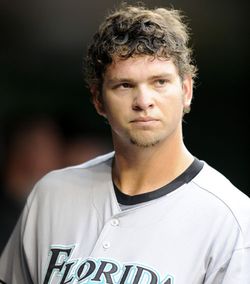 Catcher John Buck said the Marlins ace has looked good to him all spring coming back from the right shoulder inflammation that cost him most of the 2011 season. What Buck said excites him the most is he knows Johnson has another gear he hasn't shown anyone this spring and is saving for the regular season. Buck said Johnson has also started to gain more confidence in his curveball and changeup.

"If he has those two working as well as his fastball and slider he will be an unbelievable pitcher," Buck said.

"We've seen at it times -- the effectiveness of those pitches [the changeup and curveball]. But he hasn't been able to really go to them and know they will be there at that given time with the sharpness he wants. I think he's getting to the point now where he knows that pitch will do what he wants it to do."

> With only a week left in Grapefruit League play, two bench spots are all that's really left to play for on the Opening Day roster.

With outfielder Austin Kearns, catcher Brett Hayes and corner infielder Greg Dobbs pretty much penciled in as reserves, the Marlins are basically looking at Chris Coghlan or Bryan Petersen as their left-handed hitting outfielder off the bench (or potential starter if Logan Morrison or Mike Stanton aren't ready), and veteran Donnie Murphy or 24-year old Donovan Solano as the utility middle infielder.

The Marlins brought Solano with them on this two-game road trip through Port Charlotte and Lakeland to take a good look at him. While Murphy, 29, has struggled at the plate (.194, 6 for 31 in 13 games), Solano has the second-highest average on the team behind Hanley Ramirez.

Solano, a .278 career hitter in 235 games at the Triple A level, has never played in the big leagues. But this is the longest he's stuck around in camp in his career and he's hopeful he could sneak onto the Marlins Opening Day roster.

Solano, born in Barranquilla, Columbia, grew up playing soccer and baseball. But he fell in love with baseball after seeing fellow Columbian Edgar Renteria drive home the game-winning run in the 1997 World Series. Solano was nine at the time and eventually got the chance to train some with Renteria when he was a teenager.

"He taught me a lot of things, how to take ground balls, baseball stuff," Solano said.

As for soccer, Solano said he just wasn't good enough. "I started at forward and kept getting moved further and further back," Solano said. "They didn't want me around the ball."

Posted by Manny Navarro at 12:45 PM in Pitching Staff, The Lineup | Permalink | Comments