KISSIMMEE -- Jose Ceda is no longer in the mix for a bullpen position. According to a team source, Ceda has a right elbow sprain and is out indefinitely.

"He won't be going South (to MIami)," the source said.

Have also learned that Ceda may seek a second opinion from Dr. James Andrews and could elect to undergo Tommy John surgery. Ceda pitched last on Thursday in Kissimmee against the Braves.

Ceda has had a decent spring, making five appearances and allowing a run over 7 1/3 innings, striking out eight and walking two.

The remaining field of contenders for the final bullpen spot (or spots) include Wade LeBlanc, Chad Gaudin and Gary Glover. The Marlins haven't decided yet whether they will use LeBlanc as their long man or send him to New Orleans as insurance in case one of the starters on the big-league roster goes down.

However, after stretching LeBlanc out and having him make a Grapefruit League start, the Marlins have shifted gears and are now going in the other direction with him. LeBlanc threw one inning of relief on Wednesday and is down to work out of the bullpen again on Friday, perhaps signaling the Marlins ultimate intentions with him.

KISSIMMEE -- Now that he's moved to the National League, Marlins manager Ozzie Guillen can actually give thought to experimenting a bit more with his lineup. One option that might be worth exploring: batting Carlos Zambrano somewhere other than the nine hole. Tony La Russa used to do it all the time with his pitchers when he managed the Cardinals and had Albert Pujols in the lineup. Jack McKeon tried it a few times toward the end of the 2005 season with Dontrelle Willis, installing him in both the 7th and 8th slots.

While Guillen hasn't ruled out that possibility, he prefers keeping Big Z -- one of the top hitting pitchers in the majors -- in the bottom spot. 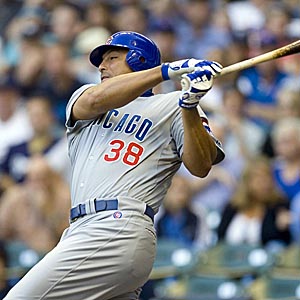 And, at the moment, Guillen said he can't think of a good reason, even though Zambrano has the hitting credentials to make it something worth considering. Zambrano's career .241 average is identical to John Buck's career average. Zambrano has won three Silver Slugger awards as the league's top hitting pitcher. His 23 home runs put him in a tie for 9th (with Walter Johnson) on the all-time list of most home runs by a pitcher (Wes Ferrell sits atop the list with 38). Even though Zambrano had a mediocre season on the mound last year for the Cubs, he enjoyed his best season at the plate, hitting .318 with an OPS of .848.

Nonetheless, Guillen said he prefers Zambrano in the 9 hole.

"I don't think any pitcher is better than a (position player)," Guillen said. "I just worry about, make sure you pitch, that's why you get paid."

Guillen could use Zambrano off the bench as an early-innings pinch-hitter, though the pitcher's career numbers in that department (3 for 29 for an .094 average) are much less impressive than his overall numbers.

Posted by Clark Spencer at 11:20 AM | Permalink | Comments