Awed parent says Greg Dobbs went above and beyond

JUPITER -- Received an email yesterday from Peter Walsh, a Miami attorney who wished to share a "feel-good story" involving the Marlins and, in particular, Greg Dobbs. I thought it was worth sharing, too. Here's what Walsh had to say:

"Yesterday (Sunday), after the Cardinals game in Jupiter, they held a clinic for the first 100 kids who signed up ($75 per kid got you into the clinic plus 2 bleachers tickets). 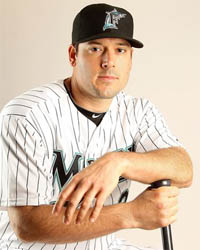 "The clinic was supposed to be about an hour long, with the kids spending 15 minutes at each of 4 stations--Joe Espada manned the baserunning station; Bryan Petersen did the outfielders station; Heath Bell did the pitching station; and Greg Dobbs did the hitting station. Some of the parents thought this would be a rush job in which the kids didn't really get to do much. In fact, however, it was very well run and the kids really enjoyed it. And Espada and the 3 players were great with the kids. And Logan Morrison came out of the clubhouse dressed in street clothes, and he mingled with the kids for about an hour or so, taking time to talk to all the kids and sign autographs for everyone.
"But the amazing part was Greg Dobbs' batting station, which was in the batting cages outside the stadium. Dobbs, on his own accord apparently, stretched his station out to about 1 hour per group (rather than 15 minutes)! Long after the other Marlins players had all gone home to their families for Sunday dinner, Dobbs patiently handled kid-after-kid, hour-after-hour. I left at 7:00 pm and Dobbs was still patiently taking time with each kid individually, making sure the weaker kids all got to experience the thrill of getting off a good hit. The spring training staff seemed to be trying to shut the complex down, but Dobbs, fully decked out in his Marlins uniform, kept right on going. He was simply oblivious to everything going on around him except for the one kid at a time he was working with. He never lost focus and never even took a bathroom break for about 4 or 5 hours.
"I have coached kids for a few years now, and I consider myself pretty knowledgeable about coaching kids. But watching Dobbs at work with kids from age 5 to 15 was truly amazing. I don't know if he has any kids of his own, but he had the rare ability to size up each kid as the kid entered the batting cage, and he knew EXACTLY how to adapt his approach to the age and ability of each kid, and knew exactly how to quietly engage each kid.
"Many parents, like me, stood around the chain link fences around the batting cage, just watching in amazement at how he handled each kid. He seldom raised his voice above a very quiet volume, almost a whisper that only that kid could hear, so we had to strain sometimes to hear what he was telling each kid. And I'm pretty sure each kid left his station believing that he and Dobbs had bonded, and that Dobbs had passed on something special to him alone. It was really something to see."
Peter Walsh