JUPITER -- By the time Eduardo Perez replaced John Mallee as the Marlins hitting coach last June 8th, Hanley Ramirez was already playing like damaged goods -- sitting on the disabled list with back pain and a mere .210 batting average. 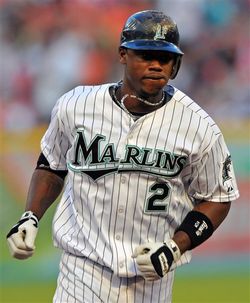 The player Perez is seeing this spring hardly resembles that guy.

"We got three key free agents everybody talks about. I say we got four," Perez said Sunday morning, about three hours before the Marlins were set to take on the Cardinals at Roger Dean Stadium.

"My other free agent is Hanley... We got a top notch free agent third baseman. He's MVP material."

Ramirez, who hit a career worst .243 with 10 homers and 45 RBI in an injury-plagued 92-game season last year, has been hammering the ball this spring. Saturday, he smacked his third home run of the spring (second in Grapefruit League action) and is now hitting a team-leading .473 (9 for 19) with four RBI, four walks and three strikeouts in eight games.

In January, Perez expressed his concerns to MLB Network about how the 28-year old Ramirez would handle a position shift to third base and how off-season shoulder surgery might impact his bat. After spending his off-season training in his native Dominican Republic with two-time reigning home run champion Jose Bautista, Ramirez looks like his old-self -- only better.

The key, Perez said, is that Ramirez's back is healthy. Ramirez is also 10 pounds lighter.

"What I can see that's a good sign is that he can guide the ball to right-center, and not lob it into right field. Now, he's driving it into left-center and left field," Perez said. "The [home run] he hit [versus the Twins' Carl Pavano Saturday on a 2-2 pitch] was middle in. The one hit in Port St. Lucie [March 11th vs. Mets] on an 0-2 count was down and in.

"He's getting the head of the bat out. He's throwing his hands out and his hips are being used to perfection. It's a big deal for him. I think he's going to again be one of the top players in the league and maybe the top player in the league.

"It helps that he's seen this organization has done everything to help this team succeed. I think that right there is what really, really drives him. It's a good team on paper. Now, we just have to put it together on the field."

General manager Mike Hill spent Sunday morning playing grim reaper inside the Marlins clubhouse, letting a group of 11 know they were being sent down to the minors.

Left-hander Brad Hand and right-hander Evan Reed were optioned to Double A Jacksonville.

Hand, who has shown signs of improvement with his control by staying consistent with his arm slot, didn't take the news poorly despite making 12 starts for the Marlins last year.

"It was great to get a few starts, get your feet wet and get to know what it takes out there," Hand, 22, said of his stint with the Marlins last year. "I haven't gone more than two innings [this spring]. I'm looking forward to getting stretched out and get ready for the season."