« Who will set off the Marlins home run sculpture first? See the video of it in action | Main | Choate, Buehrle happy with efforts as Marlins tie Tigers 3-3 »

LAKELAND -- Ozzie Guillen said Sunday he was going to lean on pitching coach Randy St. Claire to decide who serves as the setup man for closer Heath Bell. Well, if that's the case, consider Edward Mujica the heavy favorite to be that guy come Opening Day. 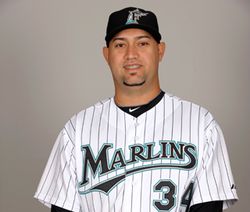 "For me right now, probably Edward is the guy who had the most chances in that role [last season] and did a pretty decent job," St. Claire said Monday. "For me, it's his job to lose."

Mujica, 27, hasn't done anything to lose that job this spring, even though the rest of the Marlins bullpen has pitched really well, too. In five appearances, Mujica has posted a 1.80 ERA, striking out six with no walks. Ryan Webb has done even better -- tossing six scoreless innings of relief in five appearances with three strikeouts and no walks. Steve Cishek has a 1.93 ERA in 4 2/3 innings, with three strikeouts and two walks.

Of course, the Marlins were hoping to have someone else serve as their setup man before spring training began -- former closer Juan Carlos Oviedo. But with the man formerly known as Leo Nunez still on the restricted and sitting in the Dominican Republic, the Marlins have had to move on with their plans and it appears Mujica, Oviedo's close friend, will fill his spot at the start of the season.

St. Claire said aside from Mujica the Marlins could also use left-handed specialist Randy Choate to get tough lefties out in the 8th before inserting Mujica after him.

St. Claire said what separates Mujica from other Marlins relievers in that eight inning role is his ability to get lefties out with his split-fingered fastball. Last season, lefties hit .220 against Mujica in 132 at-bats compared to .245 versus righties in 143 at-bats.

"And that's something you got to have out of your guys in the back end of the pen. When you're in a one-run game, two-run game, you can't be putting guys on base. He doesn't. He makes them hit the ball."

If Mujica were out, St. Claire said: "It would be a mix and match type deal, who you got coming up whether they're righties, lefties, that type of deal. You try to mix and match to get through that inning. But when you have that true eighth inning guy, it's usually 'here's the ball.' Just like the closer. You're not usually worrying about matching up because he gets both out the same."

St. Claire said he's asked the Marlins several times this spring for an update on Oviedo, but has been told repeatedly "there's no news."

> Choate will pitch in Grapefruit League play for the first time today against the Tigers. St. Claire said he wants to get him about 20 pitchers -- or an inning of work.

> St. Claire said the only Marlins starter who won't be allowed to go over the 95-pitch mark at the start of the season is Anibal Sanchez, who was held back a start at the beginning of Grapefruit League play because of shoulder stiffness.

St. Claire said the way the Marlins starting rotation is lined up at the moment, Ricky Nolasco will face the Yankees at Marlins Park Sunday and Carlos Zambrano will start versus New York a day later.

The rotation will then reset with Josh Johnson pitching on Opening Day April 4th against the Cardinals and Mark Buehrle (April 5th), Nolasco (April 7th) and Zambrano (April 8th) lined up to pitch versus the Reds in Cincinnati. That means Sanchez, slated to be the Marlins fifth starter, will make his debut April 9th in Philadelphia.

> Last year at this time, Donnie Murphy was preparing to serve as the Marlins starting third baseman on Opening Day. Now, he's not sure if he'll have a roster spot on the 2012 Marlins.

The 29-year old veteran utility man has struggled this spring at the plate, hitting just .194 (6 for 31) in 13 games and is receiving stiff competition from 24-year old non-roster invitee Donovan Solano (hitting .375 in 17 games) for the job.

Murphy isn't in the starting lineup today against the Tigers, but he will make an appearance off the bench. He hopes to make the best of it and every other opportunity going forward.

"Obviously this is not where I wanted to be at this point," Murphy said Monday. "But I'm not going to worry about it. Whatever happens, happens. Every year there is always competition. Sometimes you're in a position where you're comfortable and sometimes you don't. I can't control that. Hopefully, I'll use this last week to finish up strong and go from there and see what happens."