Ozzie Guillen has a lot of friends throughout baseball and one of them -- the agent of 30-year old Venezuelan right-hander Armando Galarraga -- recently reached out to Guillen to see if the Marlins might have any interest in signing him. 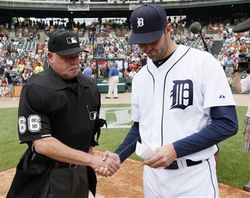 You remember Galarraga. Two summers ago with the Tigers he retired the first 26 hitters he faced against the Indians, but his bid for a perfect game was ended one out short when first base umpire Jim Joyce incorrectly ruled that Jason Donald reached first base safely on a ground ball. Galarraga instead finished with a one-hit shutout in a 3–0 victory.

His career has gone downhill ever since. He finished the 2010 season 4-9 with a 4.49 ERA and was traded to the Arizona Diamondbacks, where he went 3-4 with a 5.91 ERA in eight starts before being designated for assignment. Galarraga signed a minor league deal with the Orioles this spring, but was released April 6th after going 0-1 with a 7.20 ERA in four appearances.

The Marlins aren't in need of starting pitching help at the moment. The came into Thursday's game tied for the major league lead with the Nationals and Rangers for the most quality starts in the majors at nine. Down in Triple A New Orleans, left-hander Brad Hand (2-0, 2.76 ERA), Wade LeBlanc (1-0, 2.00 ERA), and right-hander Alex Sanabia (1-0, 1.31 ERA) have all pitched well in their first three starts.

But it will be interesting to see if the team gives Galarraga a shot because of Guillen's Venezuelan connections.

"I've passed it up the ladder," Guillen said of Galarraga's request. "We'll see what happens."

> Guillen caused some controversy with his comments in Puerto Rico a couple years ago when he called Ivan Rodriguez -- and not Roberto Clemente -- the best player in the country's history. With news of Rodriguez's retirement breaking Wednesday night (thanks to our Clark Spencer), Guillen reiterated Thursday he stands by his praise for Rodriguez.

"You look at the numbers he's put up -- he's still the best," Guillen said. "People criticized me, but should know I was a huge Roberto Clemente fan, as big as anyone in his family. I think when I said that Clemente was the third best player in Puerto Rico's history, behind [Roberto] Alomar, and Ivan [Rodriguez] that was based on the position Pudge played, the way he played it for many years. His numbers speak for themselves. World Series. Gold Gloves. Silver Sluggers. What hasn't he done? All that's missing is what's coming -- the Hall of Fame."

Guillen stopped short of calling Rodriguez the best catcher of all time, but said " if I had to pick one, he would be it."