NEW YORK -- He spent only one season with the Marlins. But when Ivan "Pudge" Rodriguez calls it a career during a retirement ceremony this afternoon in Arlington, Texas, he'll depart with one -- and only one -- World Series ring, the one he received as an integral member of that '03 club.

The Marlins seldom spent big on free agents before this past winter's signing frenzy. But when Rodriguez was still on the market in late January of 2003, the Marlins took the plunge and signed the All-Star catcher to a one-year, $10 million deal.

Cha-ching. The Marlins hit the jackpot.

"It was big," said Marlins president of operations Larry Beinfest. "It was a late January kind of thing. I think we had just traded for Mark Redman and the budget was pretty much set, and Jeffrey (Loria) and I were talking about Pudge and special money and things like that....it changed a lot of things for us."

Did it ever. While it could be said of any number of players on the '03 team, It's hard to imagine the Marlins winning their second Series title without Pudge. 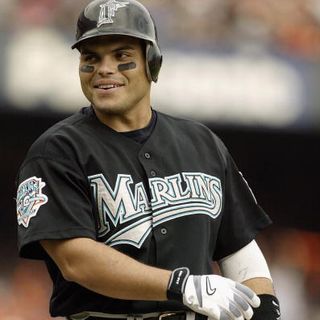 "He meant a lot to that young pitching staff late in the year," Beinfest said. "I can't speak to what he meant to them early on in the year, but when it got late and we were chasing the wild card, that kind of guy added a lot to the team. He settled the young pitchers. And then having him in the lineup around Miggy (Miguel Cabrera) and D. Lee was huge because he was so clutch.

Loria and the front office made several significant decisions that year, one of them being the trade of minor-league prospect Adrian Gonzalez to the Rangers for closer Ugueth Urbina. But pretty much all of them, including the signing of Rodriguez, worked out.

"It's just like the Urbina trade with Adrian Gonzalez," Beinfest said. "You always hate to trade away a talent like Adrian Gonzalez. But you make it every day if you're going to win the World Series. It (the Pudge signing) was a risky deal at the time. But, looking back on it 10 years now, Pudge was very much in his prime still. If you ask Jeffrey, it was money well spent."