« Reyes back in leadoff spot as Bonifacio struggles to make contact; plus Petey, Jennings arrive | Main | Nolasco is one win from catching D-Train »

Could closer Heath Bell be the first struggling Marlin to slip out of a job? 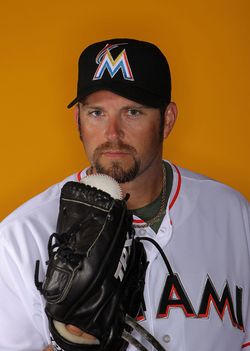 I couldn't get everything he had to say in the paper, but you caught the gist of it with his parting shot to reporters: "I’m glad we’re heading to the West Coast where nobody can [expletive] see us."

Guillen has tried throughout the Marlins struggles not to make an example out of anyone in particular because aside from Omar Infante, Logan Morrison and four-fifths of his starting rotation (Josh Johnson would be the odd guy out) the entire team has been struggling. But the first fall guy might turn out the be closer Heath Bell, who aside from converting two saves in five chances has done just about nothing right since signing that 3-year, $27 million deal.

The 34-year old right-hander entered Mondays game with the Marlins trailing by two and gave up two more runs. He's now allowed 10 runs (eight earned) on 10 hits and eight walks over just 6 2/3 innings, bringing his ERA to 10.80 on the season.

"The reason we brought him in was because he got three or four days without pitching," Guillen said. "We put him in and he had the same trouble. That's what I'm talking about when I say adjustments."

Oh yeah, adjustments. Guillen went on and on about that after Monday's loss, saying he couldn't blame fans for booing the Marlins over their last two games because "I was booing too, they just couldn't hear me though."

"This game is about adjustments and we're not making any adjustments. Day in and day out we're seeing the same swings, the same approach at the plate, same mistakes. It's going to be tough to get out of that," Guillen said.

"I think [the] people [who] survive in this game, people have better careers and better years [are the] people who make the adjustments quickly. We have to start making better adjustments. If you will not make an adjustment, I'll make it for you. That's my job.

"Sometimes you have to be patient. Sometimes you try to go different ways to go about your business. But right now, I think if the players don't start to make adjustments you start to make different things [happen]. I'm going to make very drastic changes. I don't know which ones yet. But I've got a long way to go -- a six hour flight to make an adjustment. But I will make an adjustment. I'm pretty good at that. I know what [makes] a good ballplayer."

Back to Bell. Steve Cishek, who served as the closer some last year when Juan Carlos Oviedo was deported, would be any easy replacement. Cishek has looked good in April, going 2-0 with a 0.96 ERA.

Among some of the other funny lines from Guillen on Monday, here's what he said about the possibility the Marlins aren't hitting because of the large field dimensions at Marlins Park:

"If they don't want to hit here, call your agent and get traded," Guillen said. "Because they're going to play here. We're not going to play here and hit somewhere else. I don't see a problem with the other team. They're kicking our butt pretty good. We played in New York, Washington, Philadelphia and Cincinnati and they didn't hit many home runs there either. They've got the wrong manager if they think that's going to be an excuse. That's unacceptable if they're making that excuse. The ballpark's too big? Too bad. Bunt. That's the way I play."