Surprise storm cell washes out batting practice at Marlins Park, but game will start on time

Normally, the retractable roof at Marlins Park closes before storms arrive and soak the field. 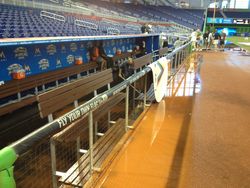 A surprise storm cell in Little Havana around 3:30 p.m. caught the stadium crew a little off guard, drenching the field and leaving more than a foot of water in the photographer and TV camera well adjacent to the Marlins dugout near third base.

Luckily, the protective tarp was already on the infield. While batting practice was wiped out for both teams, the game is expected to start on time at 7:10 p.m.

"As soon as we saw it was above us, we made the decision to cover the infield and then activate the roof," Marlins Executive Vice President of Operations Claude Delorme said.

"With this weather, and we saw it at [the team's previous home] Sun Life Stadium, you do get surprises. The cells -- one minute there's nothing -- and then all of a sudden it turns on you. I'm glad it happened now. The worst thing is if the roof was open and it happened a half an hour before the game. Three hours before the game we can deal with." 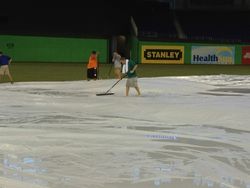 After drying the field, the camera well and parts of the dugout where standing water remained, stadium workers turned their attention to wiping down all of the 37,000 seats in the stadium and using squeegees to remove water in the aisles as fans enter the stadium around 5 p.m. The press box and suites were also soaked because they were kept open from the night before.

Delorme said it's the first time stadium officials were surprised by a storm cell on a game day since the park opened back in March. Delorme said the Marlins receive a phone call from a meteorologist off-site when rough weather or surprise cells are in the area. At that point, it takes about 10 minutes to go through the safety measures before the roof can be closed, he said. The roof then closes in about 13 minutes.

The Marlins leave the roof open throughout the morning and afternoon on most days so the grass can receive sun light and light rain.