DENVER -- It came as no surprise to Marlins manager Ozzie Guillen that Hanley Ramirez showboated a home run on Thursday, drawing the ire of Pirates pitcher A.J. Burnett.

“That’s Hanley,” Guillen said of the former Marlin, now with the Dodgers. “(If) Hanley hit a home run down by 30 runs, he would pimp it. That’s the way he is.” 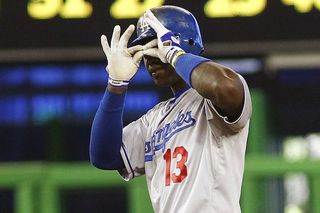 Ramirez angered Burnett when he homered off the pitcher in the fourth inning and gestured by using his fingers to make circles around his eyes, similar to the “lo viste” gesture popularized this season by the Marlins.

When Burnett struck out Ramirez in his next at bat, he yelled “Sit the (expletive) down.” Afterward, Burnett told reporters he thought Ramirez went overboard.

Guillen said he doesn’t care for such antics.

But Guillen said it would be hypocritical of him to object since his own players are guilty of gyrations.

“I cannot say (anything) because my players do a stupid show,” Guillen said. “They’re a last-place team. They score one run and they (act) like we score 100.”

Justin Ruggiano is aiming for a Sunday return to the lineup, but said it all depends on how his back and oblique respond between now and then.

“As soon as I can get to where I can swing and not feel it, I’m ready,” said Ruggiano, who took some practice swings off the tee on Friday. “The more swings, the less I feel it. It seems like when it’s good and warmed up, it’s good.”

Ruggiano started Wednesday but left the game after two at bats because of soreness in his side and back. Because the Marlins were mired in a long scoreless innings slump at the time, hitting coach Eduardo Perez tried to change the team’s luck by locking the doors to the indoor batting cage before that game.

Ruggiano said that might have contributed to his injury acting up during the game.

“I think what basically happened was I hadn’t taken a swing the day that I did it, probably due to the fact the cage was closed,” Ruggiano said.

Carlos Lee has a vested interest in the Little League World Series. His hometown team from Aguadulce, Panama, is representing Latin America, and Lee was cheering from a couch from inside the Marlins clubhouse on Friday while watching them play Uganda.

Lee sent the team a video of himself offering encouragement several days before the start of the tournament. During Friday’s pre-game introductions, many of the Panamanian Little Leaguers said Lee was their favorite player.