Beaned batter -- Adam Greenberg -- to get second chance with Marlins

ATLANTA -- Adam Greenberg, the player whose only plate appearance in the majors culminated in a beaning to the head seven years ago, will be given a second chance to receive an official big-league at bat, courtesy of the Marlins.

Greenberg, 31, received a one-day contract that will allow him to bat Tuesday at Marlins Park when the Marlins face the New York Mets.

"It's a dream come true, part two," Greenberg said. "Life’s going to throw you curveballs, or a fastball to the back of your head. I got hit by one of them. It knocked me down. I chose to get up and get back in the box." 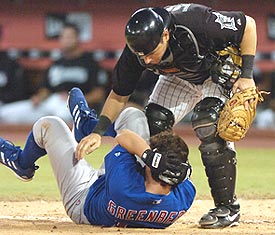 On July 9, 2005, while making his major league debut as a pinch-hitter for the Chicago Cubs, Greenberg was struck in the head on the first pitch thrown to him by Marlins reliever Valerio de los Santos. Greenberg fell to the ground and was removed from the game. It would turn out to be Greenberg's only major league appearance. Afterward, he struggled with post-concussion syndrom, double vision, nausea and vertigo and was never able to climb back to the majors.

Fred Van Dusen of the 1955 Philadelphia Phillies is the only other player in major league history to be hit with a pitch in his only major league plate appearance without ever taking the field. For official scoring purposes, a player is not credited with an at bat when hit by a pitch.

Greenberg has been the subject of a national campaign to get him an at bat. The Marlins received special permission from MLB commissioner Bud Selig to allow Greenberg the opportunity. Greenberg recently participated in World Baseball Classic qualifying in Jupiter for Team Israel.

"He has earned this chance as his love and passion for the game never diminished, despite his career tragically being cut short," said Marlins owner Jeffrey Loria in a prepared statement. "I look forward to seeing Adam step up to the plate and realizing his comeback dream next Tuesday night."

Greenberg has agreed to donate his one-day salary to the Marlins Foundation, which will then make a donation to the Sports Legacy Institute, an organization that advances the study, treatment and prevention of the effects of brain trauma in athletes.

"This is going way beyond just one at bat, and beyond sports," Greenberg said. "This was never a gimmick. I got to the major leagues on my own merit, and I earned that spot seven years ago. So the fact this is not my first at bat, that's important. It's just not 'Poor kid, let's give him a shot.'"

R.A. Dickey, a knuckleballer and Cy Young Award candidate, is scheduled to start Tuesday's game for the Mets.

Here's the piece that ESPN's "Outside the Lines" did on Greenberg a few years ago: