« Greenberg homers in B.P.; Guillen decision could linger | Main | All quiet (for now) on the Marlins front »

Third base (again) is top priority for Marlins

Quick. Who was the last player to make as many as 130 starts at third base in one season for the Marlins?

Time's up. The answer is Miguel Cabrera, who yesterday completed the first "Triple Crown" season in the majors since Carl Yastrzemski in 1967.

How does that little nugget make you feel as you wake up from the nightmare that was the 2012 Marlins? Has there ever been a more awful trade involving a future Triple Crown winner? Why, yes. There actually was.

The Cincinnati Reds dealt Frank Robinson after the 1965 season to the Baltimore Orioles for Jack Baldschun, Milt Pappas and Dick Simpson. And Robinson didn't wait five seasons -- five seasons for that trade-induced migraine to subside even a little -- to make Reds fans sick by nailing the hitting trifecta: home runs, batting average and RBI. Robinson went off in his very first season with the O's. Not only did he capture the Triple Crown, but the Orioles won the World Series that year and Robinson was the Series MVP. 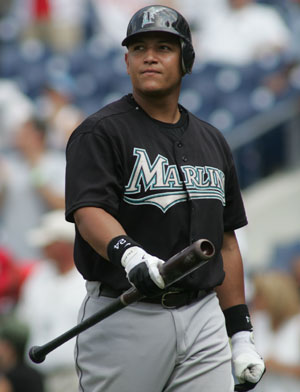 Cabrera took over at the hot corner for the Marlins in 2006 after Mike Lowell, who had manned the position for seven years, was traded to Boston. Cabrera started 157 games at third in 2006 and 153 in '07 for the Marlins. In Cabrera's final season, the Marlins drafted third baseman Matt Dominguez, believing him to be their third baseman of the future and knowing that they had no intention of paying Cabrera superstar money. They were also tired of dealing with Cabrera's off-field habits, which later surfaced in Detroit.

Third base has been an issue ever since. The Marlins have started 14 different players at third in the five seasons since trading Cabrera and Dontrelle Willis to Detroit for six humans.

Take a look at this year-by-year chart showing the Marlins' third basemen since 2006 and the number of starts each of them made there:

Of course, the Marlins thought they had this whole third base thing figured out this season. They signed Jose Reyes and shoved Hanley Ramirez over to third, where he played all of 89 games before he and the remainder of his contract ($38 million) were dealt to the Dodgers.

Look, Cabrera is certaintly no Gold Glover. His dWAR (defensive wins above replacement) was a minus 0.2. Among third basemen who started as many as 81 games, or half the season, only three finished with a poorer defensive figure: Hanley Ramirez (-0.4), Alex Rodriguez (-0.4) and Chris Johnson (-0.7).

When it comes to finding a solution at third base, there are no easy answers for the Marlins as they head into the offseason. They have identified third base as their top priority, with improvement to the bullpen next on the list. But the list of prospective free agents at third appears rather sickly (Scott Rolen, anyone?).

Most likely, the Marlins will look to acquire a third baseman through a trade -- the same manner in which the Tigers acquired this year's Triple Crown winner.