« Kotchman waiting for inflammation to go down; Mahoney eager to impress Marlins at first base | Main | Maine happy to get start in Saturday's spring opener against the Cardinals »

Morrison cleared to run on a treadmill; agent thinks April 15th is a target date for a return

It's a baby-step. But it's progress.

Marlins first baseman Logan Morrison flew out to Vail, Colo. Tuesday to visit with Dr. Richard Steadman, five months after having a second surgery on his right knee to repair a torn patella tendon. He tweeted out the following message about half an hour ago to provide an update on his status.

Just got cleared to run.. on a treadmill.. In a anti gravity bubble.Baby step, but I'll take it. Never thought I was going to this excited

Prior to Tuesday's news, Morrison had only been cleared to walk on a treadmill. He was hoping he would be cleared to run on the field as well. Still, this was good news.

"This is exactly what we wanted to hear," Morrison's agent, Fred Wray, told our Clark Spencer.

Wray said that if there are no setbacks, Morrison could be playing by April 15, "assuming that’s what the Marlins want to do."

Morrison, who hit just .230 with 11 homers and 36 RBI last season in just 93 games, told reporters before the start of spring training his status for the season opener was questionable. He had surgery on the same knee Dec. 5, 2011. That procedure was less invasive than the surgery he had in September, but Morrison said he was never completely healthy during spring training 2012.

The Marlins obviously will take their time to make sure he's fully healed before putting him back out on the field this time around.

In the meantime, veteran Greg Dobbs and Joe Mahoney, a 26-year old left-handed bat scooped up from the Orioles, continue to work primarily at first base. The Marlins signed journeyman Casey Kotchman on Friday to add depth at first base. But Kotchman sliced his left ring finger Monday running into a fly-ball machine and needed four stitches to patch up the wound.

Manager Mike Redmond said Tuesday Kotchman will likely be out for a few days. The Marlins' first spring training game is Saturday in Jupiter against the Cardinals.

A FEW MORE NOTES FROM TUESDAY IN JUPITER 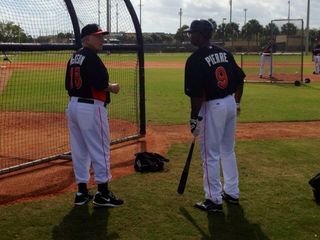 McKeon then went and got on the treadmill according to Redmond for his usual morning workout.

"Jack and I have had several conversations already," Redmond said. "He was very supportive of me getting the job and in my corner. I know he's in my corner. If anything ever comes up, I'd never hesitate to ask him."

Redmond, who played for McKeon on the 2003 World Series team, said McKeon's strength as a manager was his loyalty to his players.

"He stuck with you. It didn't matter if you were struggling, 0-for-20, he'd keep running you out there until you got it," Redmond said. "At the same time, too, he was able to get the bench guys and all of us on board to what we're doing and trying to accomplish. He made everyone accountable for their job and role on the team. It worked. He's had a lot of success."

> The Marlins will replace batting practice with simulated games Wednesday and Thursday, “just to mix it up,” Redmond said. Although there will be a defense on the field, nobody will be running Redmond said.

“These live BPs are not hitters’ favorites,” Redmond said. “We’re going to make it a little more realistic for everybody, not just the pitchers.”